Story Hooks That Can Sell 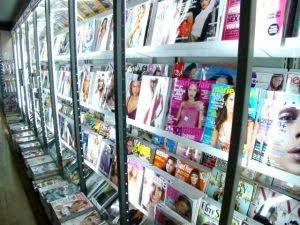 Reprinted from an article written in 2007. Author anonymous.

However, not all story ideas will sell. Even the best-laid plans for Hollywood movies don't translate to record-breaking, not even modest, returns. So why invest all that time and energy on a story that's not going to fly?

Of course, many aspiring creators have their dream projects. And there may be a chance that these projects can get them somewhere. But this post assumes that you're stuck and would really need a nice kick in the brain for a story idea that can get people interested.

According to Amazon, the following magazines top their subscription sales list, in no particular order:

Notice anything? Seven of the nineteen topsellers are magazines specifically for mature women (three of which are in the top five), and their main thrust is empowering women. Only three magazines are specific to men. Two are for the teen girl set, one is for kids, and the rest have subjects of general interest. And, surprisingly, the topselling kids' magazine is sports-themed--not cartoons, not toys, not video games.

So why am I telling you this?

It appears that more women read more magazines about empowering women. And the companies that produce these magazines know by experience what topics women are interested in. So if you're looking for a story hook that can possibly sell, check out the topselling women's magazines for ideas. There's a lot of material out there, and there is a higher chance that you'll have a market who'll be willing to check your story out.

Let's face it. There aren't a lot of graphic novels out there for women. Why not start the trend?

Making graphic novels for women may not sit well with comics creators who, by observation, are mostly male. But I hope you've taken the time to think about the idea.

Based on Amazon's subscription bestseller list, women's magazines top the chart. These are actual dollar expenditures from people who are willing to shell out money.

Plus, women read more than men. In a study conducted this year by the Associated Press, "the typical woman reads nine books in a year, compared with only five for men. Women read more than men in all categories except for history and biography." (Read the full story about reading habits through this link.)

So there's your target market right there.

And because women read more, they'll most probably find your press release in their favorite mag.

That maybe true in the US, But I'm not sure if we share the same demographics. Still, it's worth exploring....

Carver said…
Hi Auggie! :-) Yes, the article was apparently written for the American market. But demographics are universal anywhere. The slight variations would happen in the psychographics, when we bring in cultural differences, buying habits, interests, etc.

Plus, of course, the percent of the population who are willing and able to spend.