Showing posts from July, 2005
Show all
- July 26, 2005
CrossGen welcomed in the Mouse House CrossGen Entertainment of Oldsmar launched 26 comic book series during a dynamic five-year run that ended in bankruptcy court. The Walt Disney Co. snagged the rights to all 26 titles at auction last year for $1-million. Will Disney fare better with CrossGen's intellectual property? We're about to find out. The entertainment powerhouse recently announced plans to turn one of CrossGen's titles, Abadazad, into a series of chapter books for children ages 9 to 12. Tentatively priced at $9.99 apiece, the books - written as if they were the diary of the main character, Kate - will meld traditional comic book panels, text and other artwork. From the St. Petersburg Times. Full article here . - - - - - - - - - - - - - - - - - - - - Meridian would make a great movie, and Ruse would make a great television series, but I guess Abadazad would make a bigger killing. At least Alessi got something out of it all, even if his name isn't in th
1 comment
Click here to read more...
- July 17, 2005
Bland "Blonde" One would think that after all the hype surrounding Peque Gallaga's return to the directing helm, along with the slick trailers of his latest work Pinoy Blonde, there ought to be some kind of viewer pay-off. Yes, it's not an ordinary Filipino film, but it's not that groundbreaking either. I sat through it expecting to fall under a similar spell cast by Mike de Leon's Bayaning Third World. Two different breeds, yes, but both operating on efforts at deconstruction. Pinoy Blonde looks at film as Bayaning Third World looks at Philippine history, but the former attempts to add a level of cool through the use of a rock-based soundtrack, cartoon interstitials, , a few special effects, and casting Eppy and Boy2 Quizon in lead roles as actor and director wannabees. The result is a mish-mash of visual tricks (many of which we've seen before), half-baked punch lines, a sprinkling of social commentary, and an episodic structure that leaves no emo
3 comments
Click here to read more...
- July 12, 2005 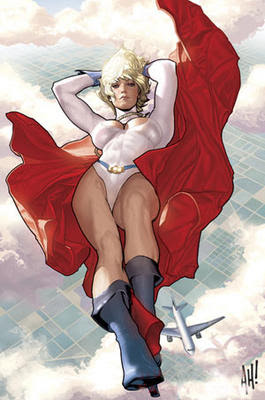 *Sigh* Adam Hughes' jaw-dropping style has been a major influence on my work. I only saw this piece recently, posted on a mailing list for Hughes fans... I wanna cry. Gawd, I wanna cry...
3 comments
Click here to read more...
- July 09, 2005
Faults It is unfortunate that we live in a country that is quick to find fault, quick to judge, and quick to take to the streets… and yet so slow in offering solutions. Sadly, very few want to be held accountable for the mistakes they make. This, in some strange thread in the consciousness, reminds me of that form of national celebration that took place some time ago, when Jasmine Trias visited the country. There had been complaints from fans that the entourage of Trias was either rude, or harsh, or too strict. But Trias’ party had every right to be so, for allowing a hole in the dike would surely lead to flooding. If Trias had any close friends here, I wouldn’t know if they’d be allowed backstage passes. But anyone who’d be particularly influential –say, a politician—might have had a private audience with the pitchy singer through some contact or other. That is, after all, what ‘friends’ are for. Friends. While listening to one of those senate hearings on the numbers-game scandal
Post a Comment
Click here to read more...
- July 03, 2005
Alien Scum Two movies about, or heavily involving, aliens. One’s a thriller, one’s a comedy. Both based on works of fiction that I haven’t read. Both short of fantastic. Elbert had said that the big-screen adaptation of the cult fave The Hitchiker’s Guide to The Galaxy looks like a made-for-TV special, and I have to agree. Still, this treatment worked for me. Visually, it’s very British, though don’t ask me what “visually British” means as I don’t have a clue. I just know it when I see it. I have to question, though, the use of American actors, as their grasp of the intended brand of comedy falls short of effective, like having Filipinos do Hongkong martial arts, the latter being more humorous unfortunately. I enjoyed the film. There were some good laugh-out-loud moments for me, and a number in which I guffawed alone in the semi-filled theater, causing some embarrassment for me. The animatronics used on the bad aliens is a definite step up, a dying art that is much more effective
3 comments
Click here to read more...
More posts