Showing posts from December, 2007
Show all

- December 30, 2007
Enteng Kabisote 4 This franchise has proven to be a top moneymaker ever since the first installment came out, so the producers should have been gracious enough to actually invest a little more money to make it really good across all aspects of moviemaking. But life can be unfair. So unfair. The Good: The flashbacks using footage from Okey Ka, Fairy Ko . An unnecessarily long-winded sequence, but great for nostalgia . Sakal, Sakali, Saklolo The first movie ( Kasal, Kasali, Kasalo ) is light years better than this. There were a number of good laughs here, but three-fourths into the episodic Sakal... , I began to wonder if the movie would ever end. The Good: Director Jose Javier Reyes' cameos. Resiklo For all its CG and production design efforts, Resiklo suffered from its own ambitions. The Good: Mylene Dizon, who unfortunately had only a bit part; and the first battle of the resiklo robot; CG is improving overall.
2 comments
Click here to read more...

If you believe in objectivity...

- December 27, 2007
Now I have no grudge against the subject, but for the sake of objectivity, please please please edit this Wikipedia entry if you feel you have some authority on the matter, and can do so while remaining calm. Thanks.
18 comments
Click here to read more...

- December 20, 2007
It's an old issue from August. But what the hey... "On the next day of launch, we discovered a design flaw. Nagkaroon po ng dalawang number sa isang wheel. The next day po, we immediately corrected it." -- statement of ABS-CBN on the "Wilyonaryo" game fixing controversy A new twist to the issue stems from a video that shows a rehearsal session for the Wilyonaryo segment. So is it really a design flaw? Despite the video, ABS-CBN has brushed the issue aside , given the recent tussle with the Kapuso network over Nielsen ratings.
3 comments
Click here to read more...

Sometimes I'd check out my previous works and wonder, "How the hell did I do that?" I guess practice not only makes perfect--it makes consistent. For the past few posts, I've been doing mostly pinups, but then that's different from rendering a situational, much more a set of sequential pages. I have to slowly bring myself back into full drawing mode if I'm to be satisfied with any major comics project I'm going to do. Click the image to enlarge. Doing this image was fun, though took longer than I had hoped. I've been visiting Digital Webbing of late, and posting some stuff on the boards for a light bashing on the head. Of course, some critique has to be taken with a grain of salt, but others are worth considering, especially when I get hit with comments about my lack of coloring skills. Anyway, I hope you like this piece. Those in the know, constructive feedback would be nice. Thanks.
12 comments
Click here to read more...

- December 06, 2007
...when I render myself scarce. Just like last year and the year before that, I'll be taking a hiatus from blogging, though I might holler from time to time when something comes up. Thank you for sharing your time with me. Sometime in the middle of the month, the Real Living team may head south to Boracay again, thus fulfilling my hidden wish. Let there be sun, please. I must soon plunge headlong into my latest Graphic Classics assignment. Though the deadline is still a few months off, I shouldn't get complacent. I'll be experimenting again, art-wise--a cross between what I did for Siglo: Passion and what I learned from Ben Templesmith. Methinks I'll be able to churn out pages a bit faster. Methinks. The Zaturnnah script is moving, and the more I work on it, the more insights I get. There's the danger of overwriting, but I've got one hand ready to yank a leash in case I'm tempted to stray too much. Just finished writing a "painful" Dodong sc
Post a Comment
Click here to read more...

Real Living December 2007: Win Everything On Our Cover! 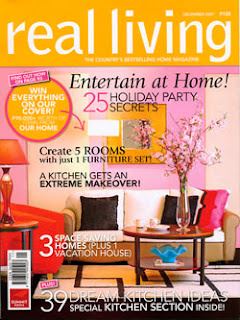 That's right. Just like last year's successful promo, Real Living is giving away over P90,000 worth of furniture and accessories courtesy of Our Home. Grab a copy of our December issue to find out how to join. In addition, our latest issue features: 1. Choosing a real honest-to-goodness Christmas tree, if you feel like breaking from the assembled plastic version; 2. Fantastic ideas and products for your kitchen; 3. Prepping your spare room for your balikbayan guests to crash during the holiday season; 4. A quick guide on formal dinner table setups. Plus a whole lot more. For a preview of the December issue, check out samples pages here . Available now at your fave magazine stands for P125. Buy na, now na!!
1 comment
Click here to read more...

- December 01, 2007
In the major dailies and magazines, you'll find regular columns and articles about movies, theater, the art scene, food, books, etc. Why isn't there a regular column for Filipino comics? Is it because we don't have enough to report about? Are there not enough projects, news, insights, and debates about local comics that can fill up a weekly installment? Even if we had enough material, would a publication bite the idea?
2 comments
Click here to read more...
More posts