Showing posts from February, 2007
Show all

- February 16, 2007
In 2004 and 2005, I took holiday breaks from blogging. I'd stop around November and resume in January. But that didn't happen in 2006. Methinks it's about time I did, for a month or two perhaps. That is, unless something throws me for a loop and I would need to type it all up. If you need to reach me for whatever reason, email addy is shocktherapy71-at-yahoo-dot-com. Or if you know my mobile number, text away. Oh, and please be nice. Thanks for visiting. And thanks for the Valentine greets. :-)
8 comments
Click here to read more...

A Less of Amor

- February 12, 2007
Ah, Valentine Week. Flowers, chocolates, candlelight dinners, sunset walks, motels, bodily fluids... how romantic. I haven't experienced a Valentine's Day in eight years. I had forgotten how it's supposed to go. To others, the day may be as overrated as Lovepalooza, but to me it has become a kind of pipe dream. I admit that I haven't been diligent in the romance department, only because I believe that the Universe will provide in her good time. I haven't really met anyone with whom I could go ga-ga over enough to turn predatorial, and apparently I haven't been a target of anyone's amorous intentions. I have been accused of not going out and meeting people, which supposedly decreases my chances of finding or being found. But, truth to tell, I've met more new people last year than the prior five years combined, thanks to my job, the book, the movie and the musical. So I don't know. That's the answer I give people when they ask why I'm still
4 comments
Click here to read more...

- February 11, 2007
Okaaaay... Now I've confessed that I'm not much of a fiction reader, though I've tried on and off. Short stories are no longer a problem, but novels are still gargantuan challenges. So Gibbs tags me with this: 1. Grab the nearest book. 2. Turn to page 123. 3. Mark the fifth sentence. Pick up the next three sentences and post. (In other words, post sentence nos. 6-8 on page 123.) 4. Acknowledge the book and the author. 5. Tag 3 people in turn. The book in question is Jose Rizal's Noli Me Tangere , translated by National Artist Virgilio S. Almario. I purchased it last year and have begun reading it on an irregular basis. Here's the quote... Sandaling humihinto ang mga tao pagkakita sa kanya, nag-uusap na sinusundan siya ng tingin. Nakita niyang lahat ito, nararamdaman bagaman nanatili siyang nakatungo. Narining niya ang isang lapastangang tinig ng babae buhat sa likuran at halos pasigaw na nagtanong. Tagging Tobie , Erica , and Jheck .
4 comments
Click here to read more...

- February 10, 2007
If any of you plan to watch Zhang Yimou's Curse of the Golden Flower (in Filipino, Sumpa ng Ginintuang Kep*** , translation by Gwyn ), ensure that you are as mentally calm as a hollow reed that's one with the universe. I made the mistake of watching it last night, a deadline night for the magazine, and left the theater feeling inebriated. As a story, Zhang's Curse... doesn't measure up as well as his Hero , and I think it's even thinner than his House of Flying Daggers . While the dysfunctional family tale isn't awful--it's good enough for your basic family intrigue film--the character motivations are sturdily one-tracked. However, seeing Gong Li and Chow Yun Fat on screen again was worth the price of admission. (Gong reprises her "powerful woman slowly going insane" role, using the Trembling Palm school of acting. She's just amazing.) But what the story lacked in depth, however, it compensated excessively in visuals, and "obscene"
1 comment
Click here to read more...

- February 07, 2007
When I first heard the songs Mr. Suave and Papa Cologne over AM radio, I wondered who the hell came up with them. The former's tempo reminded me of an old song about "Rasputin, lover of the Russian queen," while the latter took musical cues from another ditty, Rita Lee's Lança Perfume. But when I found out later that both were by Parokya ni Edgar , I threw my hands to the air, blushed and felt foolish. I got the joke. Only they could come up with such brilliance, and you can call be a hypocrite for making that major leap of opinion. (It's not like that other song about some guy who can't be with a girl on Tuesdays due to color coding--now that was too forced a punchline.) Now there's the mushy pop classic All of You by Julio Iglesias, sung with Diana Ross in the 80s when they were still an item. The recently released Filipino version has been getting some airplay, and I would cringe everytime I hear it because the singer tried to sound like Julio Igle
1 comment
Click here to read more...

- February 05, 2007
1) Congratulations to the organizers of the first Read Or Die Convention (RODCON) held over the weekend at the Hotel Intercontinental! The atmosphere was very legit and professional, and it was great to chat with some friends I haven't seen in a while. The highlights of my quick visit were being part of the comics panel with Gerry Alanguilan, Elbert Or, and Jonas Diego, and meeting veteran cartoonist Normal Isaac. It was a great event--too bad I couldn't stay long. 2) Congratulations to Arnold Arre for winning the first RODCON Readers' Choice Award for Best Comic Book, After Eden ! Galing galing galing ! 3) Congratulations to Tanghalang Pilipino and Ballyhoo Records for the sold-out first printing of the Zaturnnah musical soundtrack. They'll be doing a second printing, so copies should pop up in record bars soon.
4 comments
Click here to read more...

Imelda gets an Opera

- February 05, 2007
This piece of news reinforces, for better or worse, Imelda Marcos' status as "living legend." Does she get royalties out of this, or is the free publicity enough? - - - - - - - - - - - - - - - - - - - - - The disco dictator of the Philippines gets an opera By Andrew Gumbel in Los Angeles Published: 05 February 2007 in The Independent When David Byrne teams up with Fatboy Slim to write an opera about Imelda Marcos and performs it at Carnegie Hall, New York's temple of high culture, there is perhaps only one possible response - gotta go. Saturday night's world premiere of Here Lies Love - more of a narrative song cycle, perhaps, than a proper opera - was a sell-out as Byrne, the legendary co-founder of Talking Heads and experimental musician extraordinaire, chit-chatted about the eye-popping excesses of both Imelda and Ferdinand Marcos when they ruled the Philippines from 1965 to 1986. The show, made up of 23 numbers, told the same story in musical as well a
2 comments
Click here to read more...

I won't deny that I experienced palpitations while viewing Daniel Radcliffe shirtless in Goblet of Fire , but his new artistic turn all but pops my eyeballs out. (click on image to enlarge) So Radcliffe has grown into a fine young man, with some adolescent hair growth thrown into the package. And he's rarin' to show it all (in Filipino, hubu't-hubad ) in the stage production of Peter Shaffer's Equus . He's already 17 years old, legal territory by UK laws, so no child abuse issues here. In the play, he strips the goody persona and goes the wacko route. Oh, innocence... where hast thou gone? Images from Canada.com
6 comments
Click here to read more... 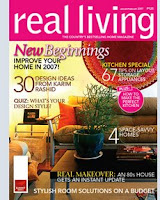 In the January/February issue of Real Living , you'll find out: • The different kitchen set-ups that achieve maximum efficiency; • What international designer Karim Rashid recommends for your modern home; • How spending for high fashion compares to spending for home furnishings; • And more! Get your copy now! - - - - - - - - - - - - - - - - - - - - - - Just got back last night from our out-of-town photo shoot, so today's a pretty quiet day at the Real Living area of the office. I came in just to check the Inbox and some of the color proofs that had piled up. I'm going to the gym tonight, as I took a break from my dieting during the whole trip. I wish I could post some photos right now--we've had some pretty breathtaking stopovers--but I can only do so when the April issue comes out.
Post a Comment
Click here to read more...
More posts