Showing posts from September, 2008
Show all

- September 29, 2008
The Amazing Truth About Queen Raquela , helmed by Icelandic Olaf de Fleur Johannesson and starring Raquela Rios, received an average rating of 57/100 from seven critics reviews over at Metacritic.com. Queen Raquela is about a Cebu-based transsexual, who dreams of living an ultimate transsexual fantasy--to meet Mr. Right and live happily ever after in a faraway land. The film already bagged the best gay/lesbian feature film award at the recent Berlin International FIlm Festival. Speaking of international awards, Dante Nico Garcia's Ploning will get a chance at Oscar glory, the film having been chosen as our representative in the foreign language category. The Judy Ann Santos-starrer beat out Chito Roño's Caregiver by votation. While I didn't like Ploning as much as I wanted to--it was just okay to me--I'm glad it was chosen over Caregiver . The latter film, while engaging (I loved how it ended), looked rushed and felt too safe. By the way, is Thank You Girls sti
Post a Comment
Click here to read more...

- September 28, 2008
Here's something I've been experimenting on myself, to which I've gained encouraging results. About a month ago, I decided to buy the following: Baguio Spinach (one bunch) Potatoes (about 2 medium sized pieces) Carrots (about 3 medium sized pieces) Saluyot Leaves (one bunch) Arugbati Leaves (one bunch) Kangkong Leaves (one bunch) Winged Beans (sigarilyas, one bunch) Upon reaching home, I chopped them all up. Chopped them up like my life depended on it. The target chop size was about half a centimeter or smaller. I put them all in a mixing bowl and added iodized salt--3 to 4 tablespoons. I also added about 3/4 cup of an olive-canola oil combo, though I figure plain olive oil would do just as well. Mixed the whole thing up, making sure that every morsel had some olive oil on them. Once I was satisfied, I dumped the mixture in one of those large Lock n' Lock containers, and slid that into the fridge. When my housemates asked me what I was making, I told them it was m
3 comments
Click here to read more...

- September 21, 2008
When I was in my mid-twenties, I applied for a position in a company that published catalogs of Chinese products for industrial clients as well as a business magazine for managers. During the interview, I was asked what my five-year goal was. And I, in want of a decent answer, resorted to the clichéd "setting up a business." The interviewer, an American, then asked what kind of business I wanted to get into, and I said that I wanted to put together a business magazine that catered to young adults in their late-teens to mid-twenties. It was to be the "for dummies" type of magazine that covered the basics of setting up and operating a small business--think Entrepreneur meets Chalk . I had more conviction over that magazine idea, because back then I had already been buying World Executive's Digest on a semi-regular basis (it was my secret guilty pleasure apart from Tagalog melodramas and kungfu flicks), depending on how much money I had at the time. The magazin
5 comments
Click here to read more...

- September 17, 2008
If there was one song that I believe had sealed Madonna's then already indelible place in pop music, that would be Vogue . Released in 1990 as the carrier single of her I'm Breathless album, Vogue was one of those dynamite chart-toppers destined to be a classic. According to Wikipedia, Vogue is Madonna's most successful single of her career prior to the advent of digital distribution. When the song was featured in the film The Devil Wears Prada , it still sounded very "now" despite the fact that it came out 18 years ago. Here's one of the Madonna's first public performances of the song, from the 1990 MTV Video Music Awards. I find the performance simply brilliant, even though Madonna lipsynchs the entire time. Just recently, Rihanna performed the song during the Fashion Rocks special. I love the arrangement--very Rihanna--but the last quarter of the song needed more oomph. The performance could have been a little more hard-edged, but maybe I'm bi
1 comment
Click here to read more...

- September 15, 2008
Thursday. It was my third Cosmo Bachelor Bash, the highlight of which were Billy Joe Crawford singing "Bright Lights" and the mega-ripped Paolo Contis. The show didn't match the energy, spectacle, and star-studdedness of last year's, but was better than the show two years ago. It was held at the new A.Venue along Makati Avenue, just across Government. A small but upscale commercial establishment, A.Venue provides a much needed contrast to Burgos Street. Friday. After work, I met Angelo at Greenbelt to watch Wall-E , my first movie after Mamma Mia! Wall-E was endearing during the first half, but digressed awkwardly to a socio-environmental statement towards the climax. Still entertaining and thought-provoking, but I feel that the two plot trails could've been meshed in a cleaner way. Saturday. Had lunch with a couple of former co-workers at Dad's Megamall. I didn't gorge on the buffet as much as I normally would have--the acid reflux issue again. Went
Post a Comment
Click here to read more...

- September 12, 2008
Limited stocks of the Zaturnnah Muzikal soundtrack are up for sale, according to the mega-talented Vince deJesus. Jump to his Multiply page for more information . :-)
Post a Comment
Click here to read more...

From a Luscious Mommy

- September 11, 2008
I find it flattering when people take my work apart and pick at the nitty-gritty, exploring facets that I had never consciously paid any attention to during those months of productive isolation. In a forum discussion over at Guys4Men , there was the question about the Zaturnnah book "depicting modernism." (I don't even know what the word means.) During the Flips Flipping Pages discussion last July 12, there was a question about environmentalism. Professor, writer and journalist Ruey de Vera once presented a semiotic reading of the Zaturnnah book to one of his classes at the Ateneo. Then there are those professors as far as Mindanao who use the book as reference in their courses. When people do this and ask profound questions about my work, it astounds me how they would actually take the time and make the effort. I'm not complaining, for sure. I am delighted and thankful at the academic attention the book has been getting. But, at the same time, there's also that
1 comment
Click here to read more... 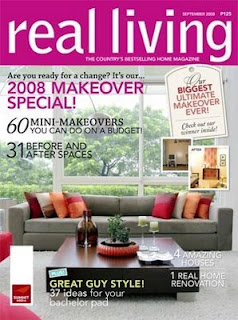 In the September issue of Real Living , you'll learn: 50 mini-makeovers you can immediately apply to your living space How renovating can increase the value of a home-for-sale Tips on organizing your own Wii party How we transformed a living room, kitchen, dining area and bathroom in our biggest makeover yet! and a lot more! Plus, you'll see where we found ourselves running from lifesized dinos, and it's not an amusement park. Real Living: The Makeover Issue is available at major magazine retailers for only P125. Get na, now na!
Post a Comment
Click here to read more...

- September 02, 2008
ASSOCIATE FEATURES EDITOR At least a Bachelor's/College Degree in Journalism or any related field. At least 2 years of working experience in the Fashion and Beauty industry, journalism or any related field. Interested and well-versed in Fashion and Beauty. At least 25 years old. Excellent oral and written communication and interviewing skills Team player, very organized and focused on deadlines. Willing to work very long hours and can deal with erratic schedules. ART DIRECTORS (SPECIAL PUBLICATIONS & SMART PARENTING) At least a Bachelor's Degree in Arts & Design, Advertising, Media or equivalent. Good at conceptualizing and translating elements into final print work given client specifications. At least 25 years old. At least 3 years of working experience in an Advertising Agency or any related field is required for this position. Skilled in operating computer applications such as Photoshop, Pagemaker, Freehand, Illustrator, etc. Adept in using a Mac computer. Highly
3 comments
Click here to read more...

- September 01, 2008
It's the oddest thing: I have all these thoughts in my mind, but I have nothing to blog about.
Post a Comment
Click here to read more...
More posts