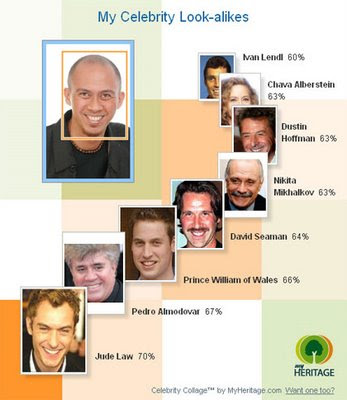 Kamukha ko daw...??? So. When I smile, MyHeritage says I look more like British actor Jude Law. But when I don't smile, I look more like Beijing-born actor and musician Leon Lai. The second photo, however, has a deceptive shade to it. My eyebags have been masterfully disintegrated by the photographer of Great Image, thus breaking a cardinal rule in photo retouching. But, hey, the MyHeritage results are flattering. I can't complain. :-)
4 comments
Click here to read more...
- August 29, 2006 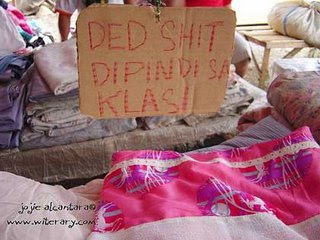 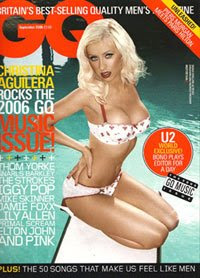 Baby Jane Thanks to that wonderful Web creation YouTube , I finally, finally was able to see the music video of Christina Aguilera's new single Ain't No Other Man , as well as her MTV Movie Awards performance of that song. Way before Xtina became a fixture in the pop music world, we all know that she rendered her version of that Mulan theme song Reflections . I didn't like it, though I confess her version is part of my karaoke repertoire. There was something too hard-edged about her voice that didn't seem to fit the tenderness of the song. A girl with a big voice, her relatives would describe her, and back then she perhaps didn't quite know how to control her gift. I was first blown away by her four-octave vocal skills in the song I Turn To You . By the time Come on Over Baby was released, my excitement went through the roof. Loved the song, loved the video, loved her voice. (And she won the Best New Artist Grammy Award at 18!) Then came her duet with Ricky Mar
Post a Comment
Click here to read more...
- August 04, 2006
Uno, Dos, Tres (Tagged by Jheck ) 3 People Who Make Me Laugh: Uno: High school pal Mike Dos: Current co-worker Gwyn Tres: Former co-worker Myrna 3 Things I Love: Uno: The World Wide Web Dos: My job Tres: My graphic novel collection 3 Things I Hate: Uno: Lack of time Dos: Misguided politicians Tres: Inflated egos 3 Things On My Desk (at home): Uno: A tee-shirt (???) Dos: My glass of "drugs" Tres: An old AAA battery 3 Things I Am Doing Right Now: Uno: Reading Dos: Thinking Tres: Typing 3 Things I Want To Do Before I Die: Uno: Become wealthy!!! Dos: Tour the Philippines Tres: Win an acting award. (HAH!!) 3 Things I Can Do: Uno: Sleep all day. Dos: Think all day. Tres: Roll my tongue. 3 Ways to Describe My Personality: Uno: Introverted Dos: Introspective Tres: Neurotic 3 Things People Might Not Know About Me: Uno: When I was a kid, I wanted to be a priest. Dos: I find grocery shopping therapeutic. Tres: My first French-kiss with a girl was for a Truth or Dare
6 comments
Click here to read more...
More posts