Showing posts from August, 2007
Show all

In Madonna's #2 Billboard hit Deeper and Deeper , she echoes Julie Andrews in saying "When you know the notes to sing, you can sing most anything." And this, I realized, was how I approach creating stories. The "notes" I refer to involve the amount of background material I gather for most aspects of a story concept I have in mind. When a concept hits me and I decide that it would make a great story, I do sporadic research and make a mind map in my head. If you didn't already know, a mind map is an organizing tool akin to thought training. But instead of a "train of thought," you're creating a "network of related thoughts." As I build this network of thoughts, ideas for plots come about, and it becomes a matter of finding the best plot and the best subplots, and linking them into a story framework that intrigues me enough to make a follow-through. I also get launch points for building characters, their background, and how they'll f
3 comments
Click here to read more... 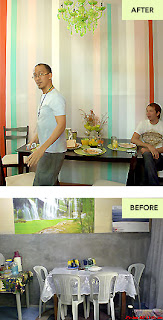 The most popular section of Real Living magazine has undoubtedly been Real Makeover. If you're familiar with all those makeover reality shows on television, well, the magazine does those every month. While the scale of the transformations is not as glaringly dramatic as those of, say, Queer Eye for the Straight Guy , the results have been enough to get people to write in with their 'before' photos and bearing hope that they'll get picked. September is a special month for our Makeover program, because it is during this month that the Ultimate Makeover takes centerstage--it's the biggest makeover of the year. This year's lucky winner earned an astounding upgrade thanks to the adventurous efforts of design consultant Gwyn. Seeing the original space was a downer, honestly, but I was all agog when we went back for the article photo shoot. You know how all those makeover winners would shriek excitedly upon seeing the finished product supposedly for the first time, an
5 comments
Click here to read more...

- August 26, 2007
Current guilty pleasure: 4 in the Morning (Gwen Stefani) Many thanks to Chong Ardivilla for inviting me to speak before his Philippine Arts class at UP Manila. It was a fun session, though time was short. Chong, a comics fan himself, was the guy who gave Zaturnnah her first full-page feature, during the time he was working for the Manila Standard (I don't know if he knows Ms. Fernandez; I didn't ask). It's been sometime since I've been in the Padre Faura area. It was only during that UP Manila visit that I had a clear sense of location about the place. At the corner of Faura would be the Philippine General Hospital, with the Supreme Court across it. A short walk towards Robinsons Place would reveal the gate of the Department of Justice. Along the sidewalk, street vendors plied their trade, unmindful that they were taking up half of the pedestrian space. The star businessman at the time was an elderly man who would carve plastic softdrink bottles into plants, using no
6 comments
Click here to read more... 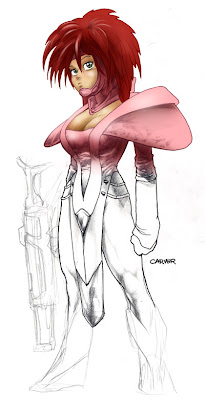 I haven't drawn anything of substance in a while, just this and a few other thumbs for the Zaturnnah sequel. I did the pencil and ink version of this piece over a month ago, but only attempted to color it last night. Praise to all comics computer colorists! I couldn't imagine myself doing what you folks do. Japanese anime art had influenced my style during the Marcos-era Voltes V phenomenon. I remember myself drawing in that style--my brother and I would invent our own 80s style mecha--but when the ban on those cartoons was enforced, my style naturally took on other influences. While I did enjoy Nobody's Child , Candy Candy and Ron Ron the Flower Girl (which was as gay as gay could be), I don't recall aching to try out anime-style fashion design. One of my more recent influences is Isutoshi , who wowed me with his work on the erotic manga Slut Girl . As it turned out, that was the only Isutoshi I admired--the illustrator's style slightly shifted in a latter proje
8 comments
Click here to read more...

- August 20, 2007
I never got to read Marjane Satrapi's graphic novel, but thanks to my boss, I was able to watch the adaptation. Persepolis won the Jury Prize of the recently-concluded Cinemanila International Film Festival. And this France-USA animated co-production is in French. Coolness. With Satrapi co-writing and co-directing, there should be no doubt as to how faithful the adaptation is. The art style is similar, but I don't know how much involvement Satrapi had in the animation style, which had a whimsical air about it, intensifying the gravity of the presented themes. Though I was totally unprepared for the last few seconds of Persepolis , the film was top-notch overall. If ever this gets into the Oscar list, then I have to reconsider and place Ratatouille in second place. Not only did Persepolis make me laugh and cry and think, it somehow suggested me that my life needed a little more adventure.
5 comments
Click here to read more...

- August 19, 2007
The core of any commercially successful story is content--concept, plot, character, theme, style. While there are other factors that dictate success, getting noticed first-hand rests on story. But what kind of story? The first level asks why we like to listen to certain stories. We listen to stories because we 1) are entertained, 2) can relate to the story being told, 3) are drawn to the way the story is being told. Whether it be a piece of gossip our friend's been dying to tell us, to that megablockbuster flick in the cinemas, we get attached to a story because of the above three reasons. If one of the three reasons falters, our attention begins to wander. The tough part is knowing what's entertaining, what can be related to, and how to tell the story. If this had been reduced to a science, then every story out there could potentially be blockbusters. The second level to consider is "who?" There are stories we purposefully don't share with some of our friends
Post a Comment
Click here to read more...

The Bridge, and the Update

- August 17, 2007
Discussions about Filipino comics have gone incendiary these days, and I find it sad that some people who love the medium have gone semi-ballistic over other parties' opinions about what's going on. The industry hasn't even gotten off the ground. I'd like to think that every lover of comics has something to say about the current status of the medium, and I also think that at this time everyone has a point. No one is entirely right and no one is entirely wrong, though some people's opinions may have more bearing given their experience. And this experience doesn't necessarily have anything to do with comics--any related industry can provide its own unique insight. In one of my conversations with Gwyn, we talked about the differing fashion sense of Filipinos across socio-economic strata. Gwyn observed that Filipinos from the D and E markets dress differently than those belonging to the B and C levels, and much more compared to the A market. And different doesn
6 comments
Click here to read more...

- August 16, 2007
On September 19, CBS will begin airing its new reality show, the controversial Kid Nation . The show will have, as contestants, 40 kids aged 8 to 15, who are supposed to "run" an abandoned town in New Mexico. During each show, kids will be divided into groups and will perform physical challenges. Winning or losing these challenges determine whether a group becomes cooks, cleaners, or the coveted upper class, which I assume don't do any work at all. They will run the town store, the saloon, and what other establishments the producers have set up for the young pioneers. Unlike other reality shows, no one gets voted off in Kid Nation . A contestant can decide to go home during any of the regular "town hall meetings" led by a town council of four kids. It is also during the gathering where the kids debate on issues of governance. Then, the council decides which of the contestants should get a gold star--a two-pound star made of real gold worth S20,000. The concep
2 comments
Click here to read more...

- August 14, 2007
I woke up this morning and saw a new text message on my phone. A television program wanted my number to seal my commitment to guest on a talk show. When I got to work, there was an email message littered with phone numbers, with the request that I make a call. I've only been on live television twice. The first was when I was 11 years old, on June Keithly's The Children's Hour . (I joined a storytelling contest sponsored by the late Vita Soymilk). The second was in the late-90s, when the New Voice Company did a production number on GMA Supershow to promote our show I Want To Make Magic . (We did a dance number.) Appearing live on television doesn't appeal to me that much because there's no prep, no rehearsal, and whatever comes out of your mouth can't be taken back. Not that I'm prone to saying anything controversial, but when caught off-guard I can look pretty stupid. The topic of the talk show would be about comics. That was according to the nice lady I s
2 comments
Click here to read more...

Get Paid For a Stronger Republic

- August 13, 2007
The Italian town of Varallo recently announced that they will pay its residents for losing weight, as its healthy Mediterranean diet--characterized by the consumption of fish, produce, olive oil and red wine--has given way to processed fat-loaded food. The news article can be found here . Unfortunately, this move is not only a temporary solution to the obesity problem, but can also place a literal price tag on one's sense of well-being. In the book Daddy Bank , author Gregory Brough discourages parents from giving kids money to do house chores. If parents treat house chores like part of the day job, kids would eventually find reasons to retire. The value of a clean home is replaced by and equated to a money sum, with the the emotional and spiritual rewards of cleaning up diminished. One can come up with other schemes. There was a time when I wondered if people would actually sign up for a population control program, wherein newlywed couples get paid for exercising responsible fam
Post a Comment
Click here to read more...

- August 04, 2007
By now you may have seen those inmates from the Cebu Provincial Detention and Rehabilitation Center displaying their terpsichorean skills with their rendition of Michael Jackson's Thriller . But if you haven't seen them do other stuff yet, you can go here . They've got Queen's Radio Gaga , I Will Follow Him (from Sister Act), and Maskulado's Jumbo Hotdog . Still, the routine that brought them worldwide attention is the best of the lot. I bet that some Hollywood producers are already mulling over a feel-good feature based on this. With the success of Prison Break , why not make some counterprogramming cash with a dancing inmates drama-comedy? It's got Adam Sandler written all over it. Or better yet, give it to the Brits, who can throw some grit and realism into the mix. - - - - - - - - - - - - - - - - - - Tonight, Cinemalaya will be showing Joey Gosiengfiao's camp classic Temptation Island at the SM Megamall theater. I'd like to watch it, but I'm
3 comments
Click here to read more...
More posts