Showing posts from December, 2018
Show all

Abolish the MMFF? or, What To Do With the Artistic Film?

- December 30, 2018
There's a nip in the air today, and a drizzle. It's been drizzling all day, in fact, somewhat unusual this time of year. But I'm still going to the mall, pay a utility bill, get some dog food, and maybe catch a Metro Manila Film Festival entry. This year's festival has the following films in its line-up: Aurora  by Yam Laranas (Horror, Thriller, Suspense) Fantastica by Barry Gonzales (Fantasy, Comedy) The Girl in the Orange Dress by Jay Abello (Romance, Comedy) Jack Em Popoy: The Puliscredibles by Mike Tuviera (Action, Thriller, Comedy) Mary, Marry Me   by RC delos Reyes (Romance, Comedy) One Great Love by Eric Quizon (Romance, Drama) Otlum by Joven Tan (Horror, Comedy) Rainbow's Sunset by Joel Lamangan (Family Drama) Note that five of them are comedies and three of them are classified under romance. I won't say yet what I'm going to watch. For many years, the attacks aimed at the MMFF have been consistently vitriolic, particularly fro
Post a Comment
Click here to read more...

It Had To Come To This 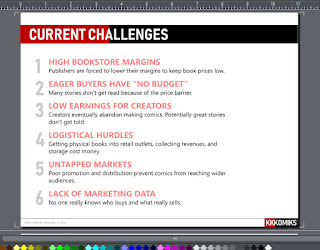 In January 2017, I posted a note on Facebook where I talked about quitting comics. That post got a lot of exposure, more than what any of my posts usually get. With that kind of response, one would think that there's still hope. However, close to two years later, yesterday, I posted this on Facebook . Unless a miracle happens, I'll be stopping after Zaturnnah sa Maynila. Making comics has been an interesting roller coaster ride, with its highest of highs and lowest of lows. Thanks to everyone who supported me every step of the way. May you be blessed always.. Note that I'm still wishing that a miracle would happen, though miracles tend to be, well, rare. I've wrestled with this over the past two years to the point of depression. Yes, that's how much making comics, a twenty-plus-year relationship, meant to me. When I would be that close to throwing in the towel, something surprising would happen, a sort of sign that would prop me up into trying again. Just t
1 comment
Click here to read more...
More posts