Showing posts from August, 2008
Show all

View From The Other Side

- August 26, 2008
I posted a few months ago about the Zaturnnah movie being shown in Washington DC to favorable reviews, and it seems that the Joel Lamangan-megged film is gaining the reputation of being the delightful international oddity. It was recently shown at the Baltimore Otakon (how that happened I know not), and here are some feedback about it from the blogosphere: "This is thoroughly entertaining and despite the quirkyness it’s worthwhile." - from mattyfo.net "The stand out for best discovery has to be the ZsaZsa Zaturnnah movie, which is one of the most hilarious things I have ever seen." - from oneiric22's LJ page "It's a really brilliant bad movie and the love story between Ada/Zsazsa and the local village hunk Dodong is terribly sweet. I can't recommend this movie enough for people who love movies so bad they're good. It's fantastic." - from dreiser's LJ page - - - - - - - - Here's another set of feedback... "C'
7 comments
Click here to read more...

How Do I Feel? 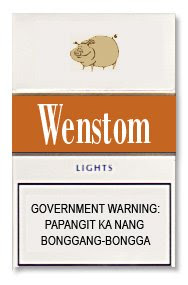 This whole acid reflux thing is interesting. Before I went to the doctor, the only symptoms that bothered me were the lump in my throat and the occasional chest pain. I never noticed how often I burped, or the tingling sensation in my tummy whenever I'd eat. It was only after the doctor had made these symptoms known that I started paying attention to them. Burp. Oh, no! A symptom! Damn, there's that funny tummy feeling... Okay, I wonder how I'd feel if I ate this? So how did today go? Floating brain, floating brain. I only had eight sticks today, a vicious cut from my usual pack-a-day addiction. (I can't do what my father did. He quit cold turkey.) I didn't take coffee at all, save for a few minutes ago--just half a cup. I slowed down my eating pace, and paid careful attention to my portion sizes. Right now, I'm cold-sweating like anything, which I heartily welcome. And the lump in my throat isn't as bad as it used to be. Like last night, I will slee
2 comments
Click here to read more...

- August 13, 2008
I love spicy food. I love coffee. I smoke. I stress myself out on a regular basis. I tend to chow down a lot during some meals, then hold back on others. I drink a fair share of sodas. And apparently, the combination of the above has recently been causing me some difficulty in breathing, some chest pains, unusual nausea and fullness in the stomach after eating, plus the feeling of a lump in the throat. What's this called? Acid reflux! It's still a mild case, according to my doctor, but this calls for a lifestyle change! I expect to be irritable over the next few days from withdrawal symptoms. *gasp!*
1 comment
Click here to read more...

Olympic Sports for the Common Filipino

- August 11, 2008
Following are the Olympic sports that the ordinary Filipino can attempt to excel in without the heavy investment (save perhaps time, a training partner, and a trainer). Other sports could have made this list, but these require team training or heavy equipment investments. Most of the following aren't team sports, allowing the athlete to focus on oneself. Badminton - A lot of training facilities. Off-the-rack equipment. Boxing - We already have a strong boxing tradition. Swimming - Akiko Thompson, Eric Buhain, et al. gave us a chance. Table Tennis - Equipment isn't too heavy an investment. Track and Field - Specifically the track events. Triathlon - Swimming, biking, running. As of this writing, fellow ASEAN nations Vietnam, Thailand and Indonesia have already won medals-- in weightlifting. Not a very "entertaining" sport, but our local sports commission should take serious note of this.
1 comment
Click here to read more...

- August 10, 2008
South Korea has a population that's about half that of the Philippines, but they've got a delegation that's 250+ strong and, as of this writing, two have already won medals. Taiwan, with a far smaller population, boasts 75. City-state Singapore has 24. Even Jamaica, a country that's about as large as Isabela province, and with a population that's just a few hundred thousand more than Quezon City, still managed to send 58. When I look at the athlete list of the Philippine Olympic delegation, I can't help but wonder again-- thirteen athletes , with only one in boxing. But then I shouldn't wonder, given the kind of financial and logistical support the local sports scene has been getting, plus so many other factors beyond the control of the athletes themselves. Still, I'd like to dream. (Kung tutuusin, hinahalo naman ang isports sa showbiz, kaya bakit hindi na lang gumawa ng reality TV talent search para sa isports? Partikular ang track and field o kaya&
2 comments
Click here to read more...

- August 08, 2008
Public service lang po. :) MARKETING GRAPHIC ARTIST: Should be... · At least a Bachelor's Degree in Arts & Design, Advertising, Media or equivalent. · Good at conceptualizing, designing & producing graphic elements based on given specifications. · Experienced in an Advertising Agency or any related field for at least a year. · Skilled in operating computer applications such as Photoshop, In Design, Pagemaker, Freehand, Illustrator, etc. · Adept in using a Mac computer. · Highly creative, can handle pressure well and willing to work long hours. WEB AND MOBILE PRODUCER: Should be... · Preferably female; 21-30 years old. · Equipped with excellent writing skills and good HTML skills. · Self-motivated, patient, resourceful and a fast-learner and should possess good interpersonal skills. · At least a Bachelor's/College Degree holder in any field. · A blogger or experienced writer who contributes content for various female-related websites. Also, Knowledge in Adobe
Post a Comment
Click here to read more...

The Worth of My Art

- August 05, 2008
Gerry posted an interesting topic in his blog about the worth of one's work, particularly art pieces. I've never really thought about the worth of my artwork except for the commission jobs I've done for ad agencies and other clients. But for my comics art? Price has never occurred to me. I guess it's because I haven't received a lot of inquiries on the matter. (Well, there was Gerry himself, who asked me a long time ago if I was willing to sell Zaturnnah art pages for his museum. I gave him a number of pages at no charge.) But more to the point, I really don't know how much my comics art is worth. You could call me insecure, foolish, or just plain insane, but I'm presently not too keen on putting a price tag on any of my work because I'm simply not satisfied with them. With 99% of them. I value my work, no question about that. I did give my all at the time I was producing them, but the more I think about how "flawed" my previous works are, I
Post a Comment
Click here to read more... 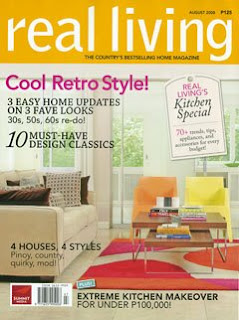 In the August 2008 issue of Real Living , you discover... 1) Six hot kitchen trends that make "slaving over a hot stove" a more inspiring experience; 2) Three retro styles that you can easily apply to your living spaces; 3) Four homes filled with inspirations that satisfy form and function; 4) The shopping spots Central Istanbul in Turkey, as well as local sources for the Turkish look... ...and a whole lot more! Only P125. Get na, now na!
Post a Comment
Click here to read more... This is a blog award. Behind the award, is a wonderful story of love and survival of a little boy given another chance to live through a heart donor.Please help raise awareness for Organ Donorship in the Philippines and abroad. From the great johnny . Tagging Camille , Mida and Zee . :)
Post a Comment
Click here to read more...