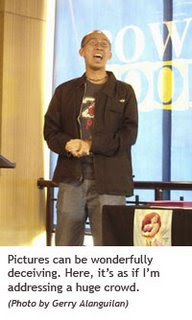 The Friday book signing event was, as expected, a quiet affair. Since it was a rainy mid-afternoon affair, there were just about a dozen or so people who came to buy books and have them signed. I expected the venue to be on the chilly side, so I bought a jacket earlier that day only to find that I didn't need it in the first place. Oh well, at least I have nice crispy jacket now. Manix Abrera came with his bandmates, one of whom was in a full Spiderman get-up. I must admit, I'm so used to seeing costumed enthusiasts at conventions, but not in a book signing in Powerbooks, especially that he (dubbed "Spider-Dan") was the only one in a skin-tight red and blue. It was great to see Gerry Alanguilan there, clicking away with his digicam, as well as Karen Kunawicz who sported a Corpse Bride tee. Thanks to Visual Print Enterprises for setting up the whole deal! After the event, David and I went around Powerbooks to look and talk about the book covers, finding delight in o
6 comments
Click here to read more...
- October 27, 2005 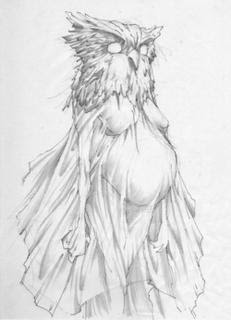 ERRATUM: The PENUMBRA launch and book signing will be from 3pm to 5pm ... not 6pm. - - - - - - - - - - - - - - - - - - - - - Speaking of PENUMBRA, I was in bed tonight recovering from a fever when I decided to read one of David's novellas, Craving . Since I did the cover for that, I might as well read it. (The image shown here is the raw pencils for the cover, which I digitally-colored for the final.) Craving is classic Hontiveros, the kind of story and style that drew me into his works over a decade ago. It was when we were just beginning to build our friendship, back in 1993, that he lent me his collection of short stories, printed cleanly in dot-matrix glory, and bound squarely in black. I remember being amazed by his works back then; he remains to be an inspiration when I write--or try to write. Of course, I am in no position to give a sensible or credible critique of any written work, but I did like Craving . Its length is just right for my limited attention-span, and its
3 comments
Click here to read more...
- October 25, 2005
David Hontiveros' PENUMBRA novellas will be launched this Friday, October 28, Powerbooks Live! Makati, 3pm to 6pm. The launch also doubles as a book signing event with Carlo Vergara (Zsazsa Zaturnnah) and Manix Abrera (Kiko Machine). ---from Budj's email (Thanks Budj!!)
1 comment
Click here to read more...
- October 24, 2005
Stuffs First off, congratulations to the organizers of the recent Komikon!!! From the way things turned out, it looked like it was grand success. Sorry to those who were aching to get a copy of One Night In Purgatory . I didn't think anyone would buy, so there were just four copies at the Alamat table. (Thanks for the help, Fero!). I heard that the four copies flew rather quickly. Since I've been out of circulation for a very long time, I got a good lift from seeing and chatting with folks I haven't crossed paths with in a long time--Gerry and Ilyn Alanguilan, Wilson Tortosa, Tobie Abad (with his Panda Bear), Oliver Pulumbarit, Vin Simbulan, Andrew Drilon, Marco Dimaano, Jac Lim, Jonas Diego, and a whole bunch'a others. I was with David Hontiveros at the Alamat table, where he debuted not one, not two, but three horror novellas, all under Visual Print Enterprises (Zsazsa Zaturnnah's...um...home studio). I did the cover art for one of the books, Craving . If you
Post a Comment
Click here to read more...
- October 22, 2005
Tagged for 20 bits about me... 1. I spent one year in Roosevelt College - Marikina for preparatory school. I was moved to Marist School thereafter, and spent my schooling years there until I graduated high school. 2. I had wanted to become a priest, only because I wanted to add spice to the services. 3. One of the first Marvel comic books I ever read was a horror trilogy featuring Man-Thing, Ghost Rider and some red-clad vampire dude. Scared the bejeezus out of me, though I'd read it a few times over. The first comic that got me interested in the medium was an issue of Uncanny X-Men, where Phoenix first appears. 4. I bawled at one Voltes V episode--the death of Mrs. Armstrong. 5. I started drawing when I was four--so my mom claims. 6. At my heaviest, I reached 165 lbs. I am now 145 lbs. 7. in the mid-80s, my sister and I had contemplated joining a dance contest on Eat Bulaga! We practiced from time to time. I think it was Street Beat . 8. My favorite dramatic actress i
5 comments
Click here to read more...
- October 17, 2005 Loving It I just loooooove my job. It's, like, one of the best things that's ever happened to me in years. I've already done four issues worth of layouts for Real Living, plus art directing photo shoots, learning a bit about styling and interior design, and even contributing an article. (That article appears in the November issue.) What's more, my proposal for a marketing program for the mag was recently approved by the higher-ups. Like many Real Living readers, one of my favorite parts of the magazine is the makeover section, wherein close to miraculous room transformations are featured, not unlike those we'd see on the Lifestyle Network. And these transformations cost a fraction of the price of a laptop, which bucks the notion that interior design can only be had by the deepest pockets. What particularly delighted me during the first few weeks on the job was learning about the "occasional chair." Yeah, I know--so if it's a chair on some occasion
2 comments
Click here to read more...
- October 16, 2005
Hooooookay... so what's been going on? Hmmm... - - - - - - - - - - - - - - - I don't smoke as much as I used to. Recently, in fact, there had been days when a pack of cigarettes would last for two days, compared to that bygone era when I'd puff more than a pack each day. And the coolest bit is that I didn't exert an ounce of effort to reduce my nicotine intake. None of that "I swear to the Almighty I'm not going to smoke." It just happened. It's refreshing to be able to eat in a non-smoking restaurant without feeling the need to step out to light up. I still have ciggies with coffee, though; that may be a bit tougher to eliminate. But I look forward to that day when I'd completely kick the habit. - - - - - - - - - - - - - - - My concept for a new graphic novel is slowly expanding into an outline. It's a relatively short piece in English, maybe about 80 to 90 pages. (Which, by my personal definition, qualifies as a "graphic novella"
6 comments
Click here to read more...
More posts