- July 07, 2013
We took a peek at compression and decompression in comics in the previous blog post. Now, let's look at pacing, or how to pace comics.

1. By default, the amount of text you place on a panel dictates pacing. The more text, the slower the pace. Chris Claremont is known for having verbose panels during his acclaimed run on Uncanny X-Men.
2. When the size of the panel is small, the pacing quickens. Conversely, large panels slow down the pacing.
3. Then the amount of visual information (details) you have inside a panel dictates pacing. The more visual information, or the more a reader has to look at, the slower the pace. George Perez' art in Crisis of Infinite Earths is a great example of this. Information, in this case, is not limited to what's actually drawn in the panel--the amount of color is also included here, as well as how "rendered" the illustrations are.
4. The angle and perspective of an illustration is also a pacing factor. Highly kinetic illustrations, that is, illustrations that play with perspective or have the horizon line at an angle, tend to quicken the pace, as they simulate the movement of a camera. Illustrations done at eye-level with a horizontal horizon line (Frank Quitely's art comes to mind) tend to slow pacing down.
5. To some degree, the orientation of panels also influences pacing. Horizontal panels slow down the pace. But because it's generally challenging to arrange a combination of vertical and horizontal panels within the fixed and finite area of a comics page, this is not used much. Bryan Hitch popularized the "widescreen" treatment, using mostly horizontal panels in comics such as The Authority to give the reader a cinematic reading experience.
6. Another way to influence pacing is by using montage panels. A montage panel is a panel that depicts different events, or a sequence of events, within the same space. Montage panels generally speed up the pacing, but are also used rarely. An excellent example of this is J.H. Williams III's stunning spreads in Batwoman.
7. In the past couple of decades, other strategies have been used to influence pacing, such as the sudden change in the thickness of a panel border, or shape of the panel, which momentarily slows down the pace. Conversely, narrowing the gutters between panels or overlapping panels speeds pacing up.

Out of the seven, the first three are the most commonly used, and it's prudent to start with these. Modern superhero comics also value the fourth. The best way for you to learn how to pace comics is to take your favorite comics, and try to find the different ways the writer or artist influence the way you read.


In this page, from The Dark Night Returns (Frank Miller, with Klaus Janson and Lynn Varley), the sixteen panels encourage fast pacing--small panels, little visual information per panel, no text. But this is also a decompressed event of young Bruce Wayne witnessing the murder of his parents. There is a slow-motion effect, but the pacing increases the amount of urgency.


In this other page from TDKR, the small panels (seven on this page), minimal text, minimal visual information, and diagonal lines encourage fast pacing. It's also a bit compressed, making this event move more rapidly.

In the next example, let's look at how Brian Bendis and Leinil Yu use pacing progressively in New Avengers #37:

The first spread is a insanely fast-paced. The second horizontal panels orients us to the chaos that's about to ensue; it's relatively slow-paced because the reader is encouraged to take in all the information the panel holds. But, suddenly, we jump into a series of fast-paced panels -- these panels are mostly vertical, tilted, and overlapping -- like a rapid succession of uneven drum beats.

In the next spread, the pacing slows down by a tad, given the larger panels, but it's still quick, using minimal text and visual information per panel. The fact that all panels are of the same size gives the reading experience an even pace. But the shifting of focus between close-ups, mid-shots, and far shots, gives this spread a lot of dynamism.


In the next spread, the pacing slows down a bit more with larger panels, but if you look at the three spreads in succession, you'll note that there is a progression. The fight starts chaotically in rapid beats. By the time we reach the third spread, the beats are slower, but bigger, lending to the idea that the heroes are taking control of the fight.

This shows that, to be effective, pacing has to be planned on a scene level, not on a page level. With pacing, you can influence that kind of "ride" you want your reader to take.

How You Break Up Information
By default, quiet, contemplative, or casual scenes are slowly paced, while urgent scenes (where time is of the essence) are quickly paced. For a writer, pacing is first determined by how you break up your story across pages.

Here's an example: take this piece of dialogue between a guy and a girl on a park bench: Guy: You're still mad at me?
Girl: Doesn't really matter now. Whether I say yes or no won't change things.
Guy: But you're talking to me now. That's a change.
Girl: You're being a smart-ass.
Guy: I've always been a smart-ass.
Girl: A patronizing smart-ass. So I guess I should be glad you broke up with me.
Guy: This conversation isn't going anywhere.
Girl: Oh, are we having a conversation?
Guy: You're still mad at me.
Girl: I'm talking to you now. That's a change. Don't spoil it.

This piece could be one big full-page panel. The visual is a wide shot of the park. In the distance is the park bench with the guy and girl, but we only see the back side. The word balloons could hover over them, strung one after another. Even if we're using just one panel, the reading pace is slow because of the amount of text. It can slow down further if the artist decides to draw this panel in a highly-detailed way.

BUT...We can choose to adjust the pacing by using five panels instead of one.

PANEL 1 Horizontal panel. Far shot of park bench, back side. Guy and girl are seated on it.
Guy: You're still mad at me?

PANEL 2 Mid-shot, front of bench. Girl is combing the hair of her dog with her fingers, not looking at Guy. Guy is looking at girl. He has a faint smile.
Girl: Doesn't really matter now. Whether I say yes or no won't change things.
Guy: But you're talking to me now. That's a change.
Girl: You're being a smart-ass.

PANEL 3 Focus on girl, her eyes still on her dog.
Guy: (off-panel) I've always been a smart-ass.
Girl: A patronizing smart-ass. So I guess I should be glad you broke up with me.

PANEL 5 Same shot as Panel 1.
Guy: This conversation isn't going anywhere.
Girl: Oh, are we having a conversation?
Guy: You're still mad at me.
Girl: I'm talking to you now. That's a change. Don't spoil it.

But in some way, the pacing slows down as well, because there is more visual information on the five-panel page, and readers tend to process any information thrown at them.

So which treatment is better? It depends on the writer's intention. Personally, using the one-panel page gives a more voyeuristic experience, or a moment frozen in time. There is a poignancy in this treatment as well. If this were part of one bigger scene, it feels like a set-up, the start of that scene, and we're anticipating that the next pages would bring us physically closer to these characters.

For the five-panel treatment, we're at the heart of the action. We see the character's expressions, which adds tone and nuance to the dialogue, something that the one-panel page doesn't provide. If this were part of one bigger scene, it feels more like the middle part of that scene.

But a major difference between these two treatments is the amount of compression they have. By using one panel, the event is visually compressed, and doesn't allow us to emphasize parts of the dialogue (aside, perhaps, from setting some words in bold or italics). By using five panels, the event is decompressed, and we get the chance to do some visual highlighting, such us showing the girl's indifference in Panel 2, or the silent panel in Panel 4. Like compression and decompression, the kind of pacing you want to have is hinged on the amount and quality of information you want to provide.

In the next blog post, we'll look at a method for building a story and converting it into a simple comics script.


How to Make Comics How To Pace Comics

instaacoders said…
Do you want the best iOS application for your business? InstaaCoders is an award winning company that provides the best iOS App Development in Delhi. We have decades of experience in building the best iOS app development services. We have developed, successfully delivered over 1000+ projects till date.
Wednesday, October 20, 2021 at 1:34:00 PM GMT+8

Property Group said…
We are a privately owned property, Qatar real estate. The Property Hunter Group has a well-established and renowned presence in all parts of Qatar precisely. We thrive hard to bring in high-end properties and premium services to our dear clients. 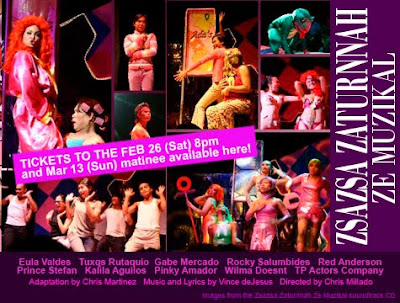 Ah, technology. As I've mentioned in a previous post, my family is selling tickets to the February 26 (Saturday) 8pm show of the Zaturnnah musical. My dear friend Jam has set up an online payment system using PayPal, so now you can reserve and pay for tickets to the aforementioned show through her blog ( http://tinyurl.com/zaturnnah-tickets ), using either your credit card or PayPal account. You'll also find an updated seat plan, so you can choose the seats you want. There are three ways to pay, and I've tested "Option 1." Works well. You can also reserve and pay for tickets to the March 13 (Sunday) 3pm show through her blog. Do check it out. If you have any questions, you can send an inquiry to her through: Mobile: 0929-6759214 Landline: 3767040 / 4009550 Email: jmayeronline [@] gmail [dot] com
Click here to read more...
- August 18, 2003
Comics Splendor One of the recently released films that I'd like to see, though will definitely be left untouched by local distributors, is American Splendor , a film based on the story of Harvey Pekar, the Ohio-based creator of the comic book of the same title. The R-rated film bagged the Grand Jury Prize at the 2003 Sundance Film Festival as well as the FIPRESCI award at Cannes, and earned accolades from critics all around (currently 94% on Rotten Tomatoes' Tomatometer). Beyond its premise involving an independent comic book creator with a day job (sounds familiar), American Splendor is interesting to me because of the way it's executed, a drama that's part documentary, with bits of animation. As described by Mike Clark of USA TODAY , "You'll also see a creative approach to storytelling that could well have blown up in the filmmakers' faces. In what could be his role of a lifetime, Paul Giamatti plays Pekar — as the real Pekar often appears on came
Click here to read more...