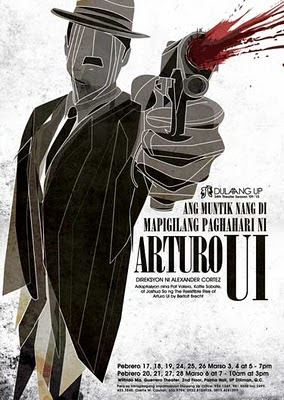 After helming the critically-acclaimed production of Atang: Dulang may Musika, director Alexander Cortez returns with Ang Muntik Nang Di Mapigilang Paghahari ni Arturo Ui*, an adaptation of the play by Bertolt Brecht. The play chronicles the rise of mobster Arturo Ui in Chicago during the Depression, as he orchestrates his control over the local green-grocery trade before eventually facing his own psychosis. Audiences will note the parallels between Brecht's play with the story of Adolf Hitler in Nazi Germany.

For more information, visit the Dulaang UP official website.