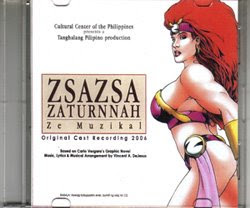 The original soundtrack of the Zaturnnah musical is now available through Tanghalang Pilipino. It has two versions--one with Arnold Reyes and Agot Isidro as Dodong and Queen Femina, respectively, and the other with Lauren Novero and Kalila Aguilos. It's P350 a pop. If you want to order a copy, you can call Tanghalang Pilipino through 8323661 for details. Music, lyrics and musical arrangement by Vincent A. de Jesus . Apart from 21 tracks from the musical, the colection contains two bonus minus-one tracks of Ada's Ayoko Nang Mabuhay Nang Ganito, and Dodong's Ikaw ang Superhiro na Buhay Ko . Plus Zaturnnah's "transformation" music. - - - - - - - - - - - - - The Philippine Daily Inquirer's Gibbs Cadiz reviews the musical here . Scroll down that page--it comes after reviews of Dulaang UP's Gabriela and PETA's Pinoy Wannabes .
18 comments
Click here to read more...
- February 24, 2006
I don't read novels much, much less those like Arthur Golden's Memoirs of a Geisha . But I love Michelle Yeoh and Gong Li, so I went to see the movie adaptation. I emerged from the Podium theater two and a half hours later feeling half-robbed. I've never seen a Rob Marshall film, not even his Oscar-winning Chicago , but I think many will agree that he's not the best choice to helm Memoirs . The best director should have been one who could dissect the Asian psyche and make it accessible. Then again, Memoirs could've benefited from a less flowery script, and even less two-dimensional motivations. In my book, there's hardly any weight in this film, and too much production design. On the lighter side, Gong Li is gooorrgeeoouusss. She made the ticket price worth my while. Too bad her first foray into Hollywood didn't turn out to be the masterpiece it's meant to be. She deserves the "I will make you believe that I understand what I'm saying" a
10 comments
Click here to read more...
- February 22, 2006
I skipped work today--wasn't feeling that well. Must've been that overnight stay at the office to meet deadlines. Working long hours alone at an office isn't new to me, but I could do without hearing fingers gliding across a keyboard from another cubicle at four in the morning. Went to the mall to get some medication. Decided to entertain myself with an Ang Lee fix. Bad idea. I left Brokeback Mountain with an anvil hanging inside my chest. Even if I wasn't able to get a lot out of the dialogue, particularly from Heath Ledger's Ennis Del Mar, the film had the emotional weight of a steamroller, running over the heart as Jake Gylenhaal's Jack Twist utters the soon-to-be-classic line, "I don't know how to quit you." Maybe I should try another film, like I Will Always Love You .
7 comments
Click here to read more...
- February 20, 2006 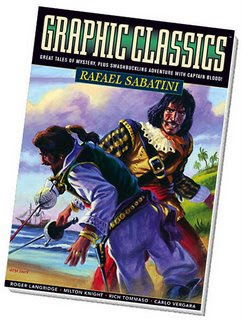 Graphic Classics: Rafael Sabatini I don't know if this will be available here, but it's got my name on the cover. (On the lower right, heheheh.) I did 40 pages worth of art for the Captain Blood origin. Gerry Alanguilan's got artwork in here too. I hope the editor likes my work enough to give me stuff to do in the future. Here's another sample page of my work for this anthology. (I had previously posted two pages in December.)
4 comments
Click here to read more...
- February 16, 2006
ME : Siguro nama'y na-experience na ninyo ang ganitong sitwasyon na sold-out kaagad ang isang production. Tanghalang Pilipino representative: Actually hindi pa. Ngayon lang. ME: E, di ang ganda ng problema ninyo! TP Rep: Noong una, magandang problema. Pero naging tunay na siyang problema, nakakainis. (laughs) - - - - - - - - - - With that, TP adds two more shows. Feb 26 and Mar 5, Sundays at 8pm. Call Tanghalang Pilipino at 8323661 to reserve. Now na!
8 comments
Click here to read more...
- February 16, 2006
Burning My shoulders are burning. Or, to be more anatomically specific, my upper trapezius muscles. That's the area between the neck and the shoulder caps. They've been burning since the middle of Valentine's Day, when my co-workers and I were out-of-town for a photo shoot. No worries--everyone save the photographer was single and had no need to celebrate. The shoot took place at a beach and we spent over four hours under the sun. I didn't expect the shoot to last that long, and I hadn't brought my sunblock. So we got back to Manila all red like boiled lobsters. Hurts like hell now, moreso when I sling my shoulder bag. But the shoot went very well and everyone loved the results, which are scheduled to come out in the April issue of Real Living . I like the idea of going out-of-town every so often, even if it's work-related. The change in environment is invigorating (envigorating?) and allows a new perspective of things, and is highly recommended for those in
Post a Comment
Click here to read more...
- February 12, 2006 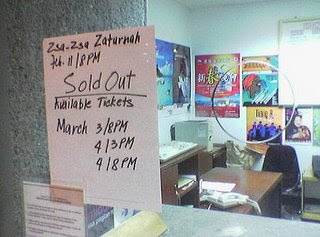 As of last night, the only showdates with available tickets are March 3 and 4. Tanghalang Pilipino told me that there's a strong possibilty that they'll add more performances during the run, either Thursday or Sunday nights. But that's still up in the air. I'm thankful that many people are dying to see the show, but I'm also saddened that some of my friends have been having a tough time snagging tickets. I have been told to push my weight around to get extra complimentary tickets, but those who know me can attest that that ain't my style. As much as I wish that I could have a "special show" where all my friends can watch for free, that's not really possible at this point. *pout* When TP staged the musical Himala , they had a successful run at the intimate Huseng Batute theater, the same venue of the Zaturnnah musical. With that feather in their cap, they moved the musical to the larger Aurelio Tolentino venue as a bigger production with a bigger
8 comments
Click here to read more...
- February 10, 2006 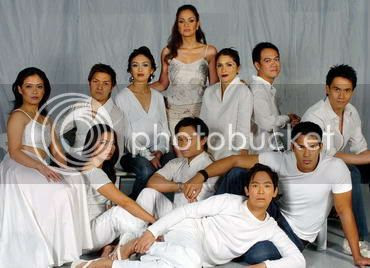 New Guinea Pig Paolo Manalo has this picture of the curtain call of last night's dress tech-slash-preview of the Zaturnnah musical. If I'm not mistaken, that red-haired woman on the right side is our fearless heroine, while the girl in the green wig is Wilma Doesnt as Dina B. I wasn't able to go because of work, but my co-workers and I are making sure we get to watch tonight. Paolo said that the running time was around 2 and a half hours. The artistic director of Tanghalang Pilipino clocked it at three. Ideally, it should be a bit tighter, but Tuxqs Rutaquio gushed in a text message about the audience's rip-roaringly positive feedback. And, yes, almost half of the shows have been fully booked even before the run has started. Right now, I don't know what to feel. I had vowed to myself that I'd remove myself emotionally from this whole deal. I guess only Alan Moore can do that, for right now my hands are a bit cold, layered by this light, suspended feelin
9 comments
Click here to read more...
- February 08, 2006
Disney conquers Billboard Even if I'm not updated much with American pop music, I still visit the Billboard Charts just to check what went up and what went down, though I don't know how most of the songs sound. Beyonce is at the top with Check On It , followed by The Pussycat Dolls with Stickwitu . And so forth and so on... Then there's this song called Breaking Free that makes the rare and unbelievable leap from #64 to #6--from out of nowhere into the top 10 after two weeks of release. Scrolling further down revealed another ditty called Get'cha Head In the Game , shooting up from #71 to #23--from out of nowhere into the top 40 also after two short weeks of release. Then a third song, Start of Something New , debuted in the top 100 at #30. Three songs making quantum leaps in the Billboard Hot 100 charts, and all are by Zac Efron, with the first and third songs being duets with Vanessa Anne Hudgens. After a quick Google search, I found out that they're with t
Post a Comment
Click here to read more...
- February 07, 2006
For those who're asking, I'll be going to the following performances of the musical: Feb 11 Sat 8pm Feb 18 Sat 3pm Feb 19 Sun 3pm Mar 04 Sat 8pm Mar 05 Sun 3pm Still working on whether I can attend opening night. - - - - - - - - - - - - - - - - - - - - - - - - - - - - - - - - Got a text from a friend. Said that Zsazsa Zaturnnah sits at #12 of National Bookstore's Philippine fiction bestsellers for 2005. Wow!! Zalamat!! *faint*
14 comments
Click here to read more...
- February 06, 2006
I don't like writing long blog posts, so I'll have to summarize the weekend's events in bullet points... Saturday Spent two hours at the gym, working on the upper body. Now I'm sweetly sore. Yippeeee!! And they finally fixed the steam room! Double Yippeeeee!! Reviewed material for a comics project for a client. Have to meet about it soon because it's a bit complex. The book isn't for commercial release. At least, that's what I think. Met with a friend from Davao who I hadn't seen since 2001. We talked about his frustrations about the medical practice, then poked a bit about the good-looking chap seated at a table beside us. The chap was one of those lookers whom you might admire exclusively as a wall ornament. He and his companions were talking about bars and night clubs. Planned more for Zsazsa In Manila . Sketching, sketching, sketching... Sunday Went to UP to watch three one-act plays by National Artist Severino Montano -- Sabina, The Ladies and t
1 comment
Click here to read more...
- February 01, 2006
Otherworldly Welcome to Intelstar is a Palanca Award-winning one-act monologue written by Chris Martinez, the same guy who wrote the script for the Zsazsa Zaturnnah musical. Here, versatile actress Eugene Domingo ( Tanging Ina ) plays Chelsea, a call center trainor during the first training day of new agents, unwittingly played by the audience. Armed with a tall Starbucks mug, an iMac, and a projector, Chelsea goes about with great enthusiasm the first-day laundry list of topics, from the company background to the basics of 'accent neutralization.' Eugene is energetic, poised and convincing in this role from beginning to end, a unique challenge when it comes to theatrical monologues. And the whole affair is downright funny, especially during part about accents. I was with a couple of friends, both call center folks, who laughed along with me for a different reason. During our smoking break after the show, I asked them how much of the play was real and how much was spoof (s
5 comments
Click here to read more...
More posts