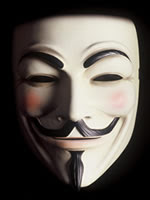 V for Victoria! What I really like about James McTeigue's V for Vendetta is how it veers away from the standard Hollywood formula of comic book adaptations, and offers a clear mirror of current events without sacrificing the overall spirit of the original material. Granted, Alan Moore's dark and verbose 1989 graphic novel is hardly superhero fare, it would have been easy for Hollywood to heighten the action and overdo the special effects to increase its commercial appeal. But V for Vendetta has only three action scenes that only pass muster, and none of the Matrix-level spectacle. In fact, it's a talkie movie. (I would watch it again to absorb all the dialogue.) The overall texture of this Wachowski brothers-produced film is desaturated and foggy, something you'd expect from artsy European films. That coupled with actors like Hugo Weaving, Stephen Rea, Rupert Graves, and Stephen Fry makes the experience more satisfying if European films are your cup of tea. I must
6 comments
Click here to read more...
- March 11, 2006 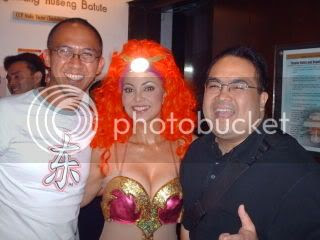 The musical made its final bow last March 5, and right now it's as if it had all been a dream. During the gap between matinee and evening shows, I took the chance to have my souvenir programme autographed by as many of the cast and crew as possible. We were at the small cafeteria directly connected to the backstage dressing room, and seeing everyone getting ready for the next show reminded me of those times when I was in theater, fidgeting over make-up and costumes and props. Because I didn't have a digicam anymore, I wasn't able to take any pictures, but the little notes scribbled all over my programme was enough to make everything memorable. The biggest surprise to me was meeting Bituin Escalante again, and discovering that she's the sister of Kalila Aguilos who alternated with Agot Isidro as Queen Femina. I couldn't hide my disbelief about their being sisters, but I guess Bituin was used to the reaction. We managed to do a little catch-up at the lobby before she
32 comments
Click here to read more...
- March 03, 2006 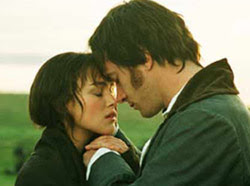 I loved Joe Wright's Pride and Prejudice , which I saw two nights ago at the highway-robbery Greenbelt Cinemas. The issues about women and social status were given more prominence in this film than in Sense and Sensibility , and yet did so without sacrificing the swoon factor. Then there's Matthew Macfadyen. *sigh* While the lovely Keira Knightley was effective in her portrayal of the free-spirited Elizabeth Bennet, I'm not so convinced about her Oscar nomination. (I'd prefer Rosamund Pike getting a supporting actress nod for her performance here.) Then again, Knightley carries the film well and her presence cannot be ignored. She turns 21 late this month, and is one of the youngest to be nominated. (What was I doing when I was 21? Oh, I was a staff writer working for DLSU.) - - - - - - - - - - - - - - - - - - - In the ol' tagboard, Shiela asked what went into the creative process of bringing the comic book to the theater stage. I can proudly say, I don't
9 comments
Click here to read more...
More posts