How Artists Sell Digital Art for Thousands of Dollars

Last January 18, "Rick and Morty" creator Justin Rolland sold digital art on the online auction platform Nifty Gateway . His collection earned him  over a million dollars.  Selling digital art for gobs of money has been a huge challenge for many artists. However, there appears to be a new hope. At least, for the more tech-savvy. Digital art, by nature, can be duplicated. And by conventional art appraisal standards, this nature has prevented digital art from standing shoulder-to-shoulder with traditional art when it comes to value. Among many factors, the price of traditional art is dependent on its scarcity. So how can a piece of bits and bytes command a high price when anyone who has access to the file can just hit copy-paste? Yesterday, I stumbled upon an online discussion on non-fungible tokens (NFTs), which is based on blockchain technology. An NFT is, essentially, a digital asset that cannot be duplicated or converted. What this basically means is, when someone buys your
Post a Comment
Click here to read more...

Finding Your Own Art Style 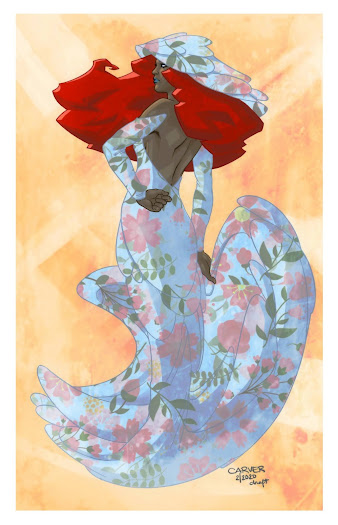 Trying something. I ripped the pattern off of Vectorstock, but I'll be replacing it for the final (if ever I get to it). I've also added the original drawing. It's a concern many young artists have: "How do I find my art style?" And I addressed this concern in a Facebook post some months ago. You're familiar with the elements of art --line, shape, form, texture, shade, color, space. And every art style is based on these elements. Not only that, art styles also cover composition, themes, and preferred subjects. Even the materials you choose to use figure into your style, as each medium can create a special effect or result that other media can't. In a nutshell, an art style is about how you interpret life. When you look at two drawings from two different artists, you'll see that each artist would have their own personal takes on the elements of art. One artist might use mostly thin lines, cross-hatching, and angular shapes, while the other artist might
1 comment
Click here to read more...

How I Deal With a Creative Slump

- February 10, 2021
In the mid-2000s, well over a decade ago, a friend of mine told me something about life cycles. I don't remember if it was a Chinese thing or some other, but it was one from an ancient tradition, the kind that certain folks come up with by observing the patterns of people's lives. Yes, them ancient folks had enough free time to do that. It basically says that the peaks and lows of a person's life happens in nine-year cycles. I also don't remember when these cycles were supposed to start, but once he applied that nine-year cycle rule to my life, my next slump was supposed to start in my late 40s, valleying at 49 or 50, with the next peak happening at 54 or 55. I didn't think of it much, me being in my mid-30s then, as these sorts of prognostications were amusing at most.  But, lo and behold, I'm in a major slump, at least for the personal projects. I have to pump out those creative energies for my contractual work, but when it comes to the stuff I want to do for
Post a Comment
Click here to read more...

- February 09, 2021
On many occasions, I've expressed (quite desperately) wanting to quit comics, and for many people, it would seem that all I've been doing is being dramatic about it. On one end, I understand the sentiment, as it brings forth my indecisiveness, and on the other end, it's true. I've been quite dramatic about it, to the point of self-sabotage. But I don't regret it, because keeping mum about it would betray how passionate I am about the art form. Those who know what it's like to both write and draw a story with a certain quality would understand. Among all the art forms I've explored--acting, writing, and drawing--making long-form comics is really HARD. And that's why I feel this "ninth art" deserves more respect and patronage. But that's not for me to declare. What I really like about making graphic novels is that it is a multi-faceted art, bridging writing, design, illustration, theater and, eventually, film, taking principles from each and
Post a Comment
Click here to read more...

When the Generalist Turns 50

- February 08, 2021
I'm the kind of person who believes that age is but a number. Even though I turned fifty last month, I don't feel it, at least mentally. It's only when the physical manifestations of age creep up and make themselves known that I briefly acknowledge the fact that half a century has passed. Half a century. That seems like a long time. And it is. But more than that, there's something about that halfway mark that prompts me to assess how I've spent all that time, not counting, of course, those innocent formative years. I grew up drawing. It was a purely a hobby. I had no intentions of turning it into something substantial. Becoming better at drawing was never a conscious pursuit, and I never wanted to make money off of it anyway. But, things happened. Choices were made. Projects were planned and executed, and... boom. I became a professional illustrator. I've done illustration work for magazines, newspapers, marketing and publicity materials, and books. It seemed li
Post a Comment
Click here to read more...
- September 29, 2019

When a Publisher Closes Doors

- January 14, 2019
A number of you may heard that Visual Print Enterprises, or Visprint, the publisher of my books, will be closing its doors in 2021. They will no longer be accepting new manuscripts, and will be focusing their efforts on releasing their last batch of books and selling off old stocks. My final project with them will be Zaturnnah sa Maynila Part Three. The reason for their closing is simple enough--the owners are retiring. While we can say that this reason is not enough to close a company--after all, the owners can simply pass the baton--we have to take it for what it is. Another publishing house is closing, one less channel for new books to see the light of day. Many have said that Visprint has made a significant mark in the Philippine book industry, as its portfolio boasts of a powerful roster of authors. And as Dr. Isagani Cruz once said, Visprint has one of the best publishing contracts around. I'm not so worried about the authors, though, as they will surely be able to find
1 comment
Click here to read more...
More posts