Showing posts from April, 2006
Show all
- April 10, 2006
My schedule for this month is particularly packed. I may have to go to work on weekends, even on Holy Thursday and Easter Sunday. So I may not be able to post as regularly or as often. Those who plan to watch the Zaturnnah Muzikal rerun may call Ticketworld at 8919999 to know which of their branches are selling tickets, or Tanghalang Pilipino at 8323661 for more info. So far, I'm sure to watch the last show, April 30 7:30pm. I wish I could watch the earlier shows, but I don't know if my work will permit me. Kaya sa mga gustong manood, go na. Now na. Baka maubusan kayo ulit. I just accepted a new project from Graphic Classics , so that's going to be taking up a good portion of my time beginning May. More research is involved here--16th century France and Italy. It's an interesting new challenge, since I have to evoke a darker atmosphere in my artwork. Gerry Alanguilan's artwork in Graphic Classics: Rafael Sabatini serves as my inspiration for the new project. Naka
7 comments
Click here to read more...
- April 01, 2006 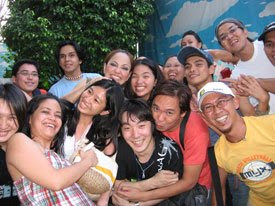 Sinag Arts March 25 brought me to the Sinag Arts Foundation in Mandaluyong, to watch the culminating activity of a technical theater workshop in which the participants had come from all over the ASEAN region and Japan. The culminating activity was an abridged version of the first act of the Zaturnnah musical, and the participants handled the lights design, sound design, and whatever other technical design covered by the workshop. Among the cast, Wilma Doesnt wasn't able to join. Kalila Aguilos played Queen Femina, Lauren Novero took the chores as Dodong (he looks more comfy in the role now), and musical director Vince de Jesus took the cudgels for Didi. Because a lot of the audience members were foreigners, parts of the script had to be translated to English. As Tuxqs told me, para silang naging kolehiyala. And Vince was hilarious! He wore the Didi role like a charm, and added more interest by lisping through his lines. It was a fresh take on a great role. After the show, I j
4 comments
Click here to read more...
- April 01, 2006 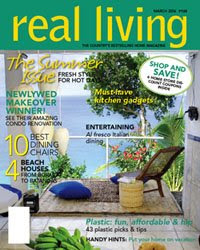 Katas ng Bora The results of our Boracay and Batangas trip appears in the latest issue of Real Living magazine. The issue features three Bora homes, including the beachfront Elizalde compound where we stayed for two nights, and a hilltop sanctuary overlooking the sea. The latter home, designed by a German architect, is featured on the cover. See the platform overlooking the sea? It's actually a wall, which can be lowered by a simple pulley system. You'll see more of that in the mag. A fourth featured home, found in Batangas, is a quirky bahay-na-bato --complete with gigantic bivalves decorating the facade--and is reputedly haunted. We stayed overnight in two small bungalows meant for guests, and my co-workers swore that we weren't the only ones there as the night wore on. The place is lovely and relaxing, though I shiver at the thought of staying another night there. Boracay, however, is lovely. There's just so much to do and a lot of people to see (if people watc
2 comments
Click here to read more...
More posts