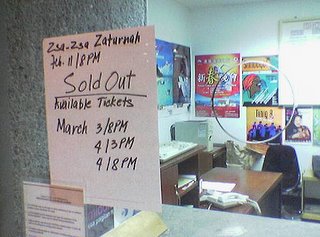 As of last night, the only showdates with available tickets are March 3 and 4. Tanghalang Pilipino told me that there's a strong possibilty that they'll add more performances during the run, either Thursday or Sunday nights. But that's still up in the air. I'm thankful that many people are dying to see the show, but I'm also saddened that some of my friends have been having a tough time snagging tickets.

I have been told to push my weight around to get extra complimentary tickets, but those who know me can attest that that ain't my style. As much as I wish that I could have a "special show" where all my friends can watch for free, that's not really possible at this point. *pout*

When TP staged the musical Himala, they had a successful run at the intimate Huseng Batute theater, the same venue of the Zaturnnah musical. With that feather in their cap, they moved the musical to the larger Aurelio Tolentino venue as a bigger production with a bigger budget. I'm crossing fingers that the Zaturnnah musical will take a step in that direction as well.

Friday opening night had Gretchen Barretto, Bayani Agbayani, Smokey Manoloto, Calvin Millado and Klaudia Koronel in the audience. During curtain call, I stepped to the stage, acknowledged the cast, was given roses, then took my bow. The feeling was like getting the National Book Award three years ago. Everything was a blur, and the applause sounded muffled. I was off the stage as quickly as I got on it. Hindi nakayanan ng powers ko ang "basking in the limelight." The representative from Visual Print told me that she was able to sell 21 copies of the book.

After Saturday night's show, I confirmed with Eula that she'll be doing all shows. Agot will be in all except three shows, if I remember correctly. (And this is, of course, given that they don't get sick or anything...knocking on wood.) But her alternate Kalila Aguilos does a great job as Queen Femina. And thank God my grandmother liked the show--she went into the theater without any clue what she was about to watch.

One week down. Three more weeks to go.
theater

Anonymous said…
oh my! the tickets are selling like pancakes! CONGRATULATIONS ulit!

can't wait for the sequel!

Anonymous said…
Saw the 8pm show last feb 11 - I was actually with 2 people who work with you in a certain publishing company (mel and paolo)...do you remember them?

Anyway, just wanted to say that it was a great show! I really had fun watching it, and I'm hoping to catch one of the last shows in March with other friends (I liked it that much!). Congratulations!!
Monday, February 13, 2006 at 9:57:00 AM GMT+8

(great feedbacks from ella and sonny! kaya nga daw kahit late na they can't help but stay till the end of the show kasi they're very sure the audience won't be able to resist and buy the book :p)

Anonymous said…
Hi Carlo! Congratulations again. I LUUUUURRRVED the show so much! I want to watch again, as in! Here's hoping they will restage at a slightly bigger venue with a bigger budget. Before the show started, I was a bit bothered at how small Huseng Batute was but my mind changed when it all started. For me, the small venue works. You'll miss all the little details if it was in a larger venue. The only bad thing is you catch a bit of spittle from some of the cast members, specially when they pronounce anything with a F! Heheh.
Tuesday, February 14, 2006 at 11:29:00 PM GMT+8

ten e. said…
congratulations, ive been looking forward to seeing the show and been telling friends about it since early january. wala na ba talaga tickets for this week??
i better check march sched then.
Wednesday, February 15, 2006 at 4:27:00 PM GMT+8

Anonymous said…
zee...naku, kelangang kulitin ang publisher! :-) As for the sequel, I hope I can find enough time to work on it na. *sigh*

jen...yes, I remember you guys. Thanks for watching. I'm glad you liked the show. :-)

xochi...so great to have seen you guys again! Thanks for watching. HUGSSSS

Unknown said…
Hi Carl. Freebies are always good, but if the product is something you really like, you have to be willing to spend for it, right? So here I am spending yet again. tee hee.