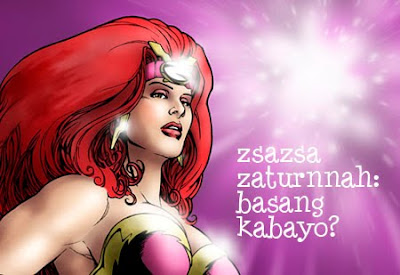 Happy 2011, everyone. If there's one thing that Facebook did to me, it would be taking me away from my blog and entice me with the simplicity of the status update. The downside of that is the lack of practice in the writing department. And since my day job doesn't require me to do much writing, the rust has pretty much spread. So forgive any grammar or spelling errors from hereon.

You may have heard that the Zaturnnah musical will have another run from February 18 to March 13 at the CCP Little Theater. This is another special fund-raising event for Tanghalang Pilipino, not unlike the fund-raiser they did in early-2009. While it's nice to know that Tanghalang Pilipino trusts the Zaturnnah musical to help them with their financial troubles, it would be great if they developed other material that had strong commercial potential. That, however, is a topic for another day.

The cast line-up is still nebulous at this point, but Eula Valdes and Tuxqs Rutaquio reprise thier roles as Zaturnnah and Ada, respectively. Arnold Reyes (Dodong), Kalila Aguilos (Queen Femina) and Wilma Doesnt (Dina B.) are reportedly in. There has been word that Gabe Mercado and Rocky Salumbides filling in the roles of Didi and Dodong, as well as Pinky Amador playing Queen Femina, but we'll have to wait a bit more for the official announcement.

My dear friend Jam Mayer-Flores is selling tickets to the March 13 (Sunday) 3pm show, as well as for the February 26 (Sunday) 8pm show. If you want tickets for any of these performances, you can reserve and pay for tickets using your credit card or PayPal account through this special page.

As far as the terribly-and-unforgiveably-delayed Zaturnnah sequel is concerned, I am now on the 55th page of the 84-page Part One. There will be three parts in all containing more or less the same page count each. I should be able to release the first two parts this year. Should.

Water Horses are quite adaptable. They make the best out of their situations, yet are the most indecisive of the elemental horses. Like the element that characterizes it, the Water Horse moves in many different directions, depending on the flow of the situation and can therefore change his mind several times a day. This can cause confusion with colleagues and partners alike, but most people chalk it up to the Horse’s adaptable nature and his ability to go with the flow of things.

I think it fits quite well.

Hogi said…
I can't wait for this (again)! And it would be equally exciting for the revamps, plus it would be cool to watch the new additions in action. Will let people know about the show dates that you're selling. =)

Can't wait for your sequel as well. I've been following your blog for updates on it. A couple of years back, Tuxqs and I were joking that there's a friend of ours in the Zaturnnah koro (he's also in it now) who looks so much like Lester that he could play him if there ever was a musical for the sequel, hahaha!
Wednesday, January 19, 2011 at 3:49:00 AM GMT+8