1) Make a standee. A standee on your table can do lots in increasing your visibility, as opposed to just having your comics lying flat in front of you. Not only can a well-designed standee attract more attention, it can also help your fans find you in the sea of geek humanity. You can either use the cover of the comic book you're selling, or create an original "poster." Print one that's big enough to mount on a 1/4 or 1/2-sized illustration board. (For the larger board, be sure to secure the back so the standee won't bend.) But if you can find a way to place your standee higher, then the better. 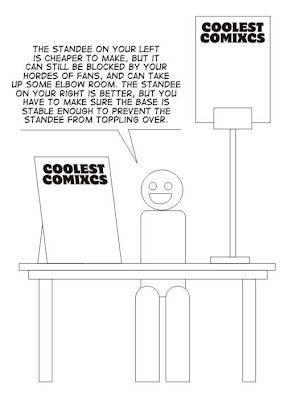 2) Make a flyer. In comics conventions, many visitors are first-timers. Not only are they surprised by the number of people in attendance, but they usually have no idea what most of the comics on sale are about. The simple act of giving out one-page flyers to passersby is a good first step in connecting visitors to what you have to offer. The flyer need not be too fancy--a letter sized one-color piece is a acceptable.

But content is key. A recommended approach is to fold one letter-sized sheet crosswise, giving you a four-page flyer. The first page will have your title, a promotional image, and a short blurb. The second page will contain a short summary of what your book is about, and maybe details about the creator, a website and email address, and even where your work is available outside the convention. The third and fourth page will hold sample comics pages. 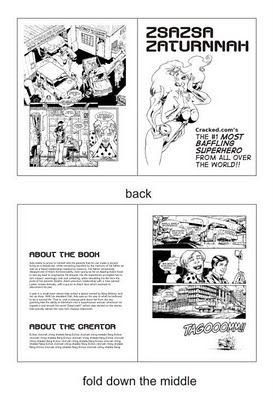 Below are sample summaries that can serve as your guide in composing your own:

"A real estate developer moves his family from Chicago to Oregon when his job calls for him to oversee the building of a major housing development. But when his latest project threatens the homes of the local forest creatures, the animals seek revenge by turning a peaceful cul-de-sac under construction into a battlefield of epic proportions. It's man versus nature and the fur is gonna fly!" (Text originally from Yahoo! Movies about the film Furry Vengeance.)

"Dave Lizewski, a comic-book fanboy, decides to take his obsession as inspiration to become a real-life superhero. As any good superhero would, he chooses a new name -- Kick-Ass -- assembles a suit and mask to wear, and gets to work fighting crime. There's only one problem standing in his way: Kick-Ass has absolutely no superpowers. His life is forever changed as he inspires a subculture of copy cats, is hunted by assorted violent and unpleasant characters, and meets up with a pair of crazed vigilantes, including an 11-year-old sword-wielding dynamo, Hit Girl and her father, Big Daddy." (Text originally from Yahoo! Movies about the film Kick-Ass.)

If you're averse to handing out your flyers, you can place them on your table with a sign, "Please get one. It's FREE! Don't be afraid." Or something to that effect.

3) Package deals. This will take a bit of coordination. Indie creators can create more mileage for themselves by offering their comics in a discounted package. Four creators, for instance, can agree to sell their works as a bundle for Php100, instead of individually for Php30 each. So apart from selling their own comics at their tables, they would also be selling the bundle containing comics from other creators. This scheme can be particularly effective if the creators' tables are far apart, but it would be practical to have similar-themed works together (i.e. a "fantasy manga" package, a "Pinoy superhero" package, a "goth-emo" package).

And, let's admit, we looove discounts.

4) "You Might Like..." Cross-Promotion. As a community, indie creators can help each other, and it won't cost a lot. It's hinged on the idea of recommending a similar product: when a customer buys something, there might be interest in buying something else that's similar or related.

Four or five comics creators can form a cross-promotion group. It's best if the comics from these creators are similar in genre, style, theme, etc. Each creator in the group creates a flyer. This flyer will be given out to customers who make a purchase, and will contain product descriptions of the comics being sold by the group, as well as where they're located in the convention hall.

Here's what Mike's flyer would look like. He will give this flyer to whoever buys a copy of Planet Panda. 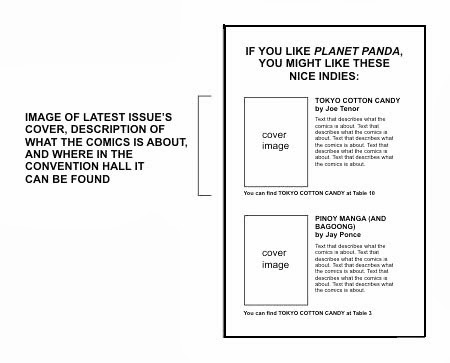 Here's what Joe's flyer would look like. He will give this flyer to whoever buys a copy of Tokyo Cotton Candy. 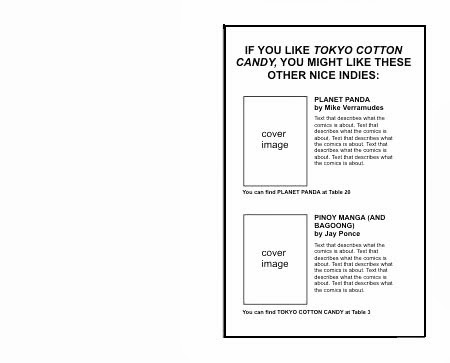 Jay would have a similar flyer, which would read, " If You Like Pinoy Manga (and Bagoong)..." and so forth.

You may also choose to use the words, "I Recommend" instead of "You Might Like." Recommendation is more powerful, because it indicates that you are standing behind the quality of the works of your peers. However, it also carries more responsibility.

5) Team Promotion in Your Alma Mater

Not really a convention tip, but more of pre-convention promotion.

A lot of convention visitors are college students, so it would be a good idea for comics creators who are graduates of the same college or university to team up. It can help if one or two members of the team are already well-known in the indie comics circuit. If a convention is months away, the team can establish contact with a student organization and propose an event, like a seminar or talk, then promote their comics and the upcoming convention. Another way to promote through the alma mater is via the official student publication. The team can contact the editor-in-chief or the department head and propose an article about the team as comics creators vis-a-vis their being alumni.

Carver said…
kc... I just have to say that I looooove Comicspotting! I love love love it! Your stories have a classic feel but they also have a certain newness to them. Wonderful stuff! (Though I will admit that the third story with the song lyrics didn't thrill me a whole lot.) Please make more. And I hope you'd try something more full length.
Monday, May 3, 2010 at 11:26:00 PM GMT+8

STANDEE na ba ang tawag nito ngayon? in our time it was called a STABILE, as opposed to the MOBILE ,na nakasabit. I agree , it has more VISUAL VISIBILITY, madaling maka-attract ng attention....

Carver said…
That's a great tip! How many browsing copies would be enough?