Because my digital camera is officially busted, I wasn't able to take any pictures from the press lunch. But I did get the press kit that had not a few promotional images burned on a CD. Here are some of them... 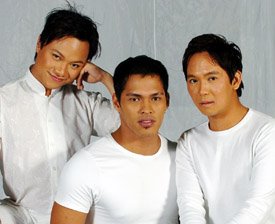 The first time I saw Ricci Chan (left of photo) was during the first staging of Rent at the Music Museum, and his performance as Angel blew me away. Since then, he's done a few more plays and even landed a stint in a showbiz magazine show. To play Didi, he says his greatest challenge is putting on a lot of weight, since he knows that nitpickers will throw a fit if they don't see their Didi on the healthy side. But Ricci is a fantastic performer, so I've no worries about his casting.

On the other hand, I've never seen Tuxqs Rutaquio (right of photo) in a play, but I do know that he's very experienced in theater. He even has a graduate degree in theater arts. The first time I ever met him was when he was a kid and I was in high school. His older brother was an active part of my Dungeons and Dragons gaming group. We met up again in 1998, when he attempted to direct this horrendous play that I acted in. And now he's playing Ada, a role that suits his personality perfectly.

Now Lauren Novero (center) first came to my consciousness when I was doing lay-outs for Icon Magazine. He had a publicity still for Pusang Gala, a film I never got to see. At this point I couldn't really comment on what I think of this casting choice. He certainly has the physique to play Dodong--he's modeled for the Cosmo Bachelor Bash--and I've been told he's got a sexy deep voice. 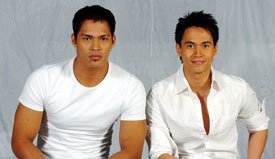 This next photo shows Lauren with Arnold Reyes, who appeared in St. Louis Loves Dem Filipinos. Sadly, I don't know much about Arnold, either. He'll be alternating with Lauren for the role of Dodong. (Scheduling issues, perhaps.)

I'll talk about the lovely ladies in my next post.

Anonymous said…
Zee... hello! Yup, Ricci is playing Didi, and his personality fits so well. I think Chocoleit is a great choice, though I'm more partial to Allan K. As for Arnold, well... he's like the boy-next-door version of Dodong, while Lauren is the 'delisyus' version. :-)
Sunday, January 29, 2006 at 11:57:00 PM GMT+8

Anonymous said…
hahahaha! i agree with Arnold as a boy next door Dodong. i don't like Lauren much but yeah, i think he'll give justice to the character!

about their bed scene, my friends got truly inspired and made their own version. :)

those are my friends.
Pao - Didi
Jay - Ada
Jayvee - Dodong

that's how much we love Zaturnnah! we'll go to the extreme!