What Happened Since May 2017

- January 26, 2018
It's been more than six months since I posted. I blame the time-sucking black hole that is social media. :-)

Here are some of the highlights from last year:

1) "I Heart Davao," the 40-episode television series aired on GMA 7. I was given the opportunity to write a number of episodes for that show, but I insisted that I could only do ten. My primary reason was that I had never written for television before, so I didn't want to dive headfirst into unfamiliar territory. Our headwriter was Chris Martinez, and the writing team had me, Dwein Baltazar, and Eljay Castro Deldoc. Our director was Marlon Rivera.

I wouldn't consider my experience as representative of what really goes on in television writing in the Philippines, but it was an eye-opener. I never imagined that I'd be able to write more than two hours worth of script (five episodes) in two weeks. It was thrilling, to say the least, seeing how the script was brought to life in the finished product.

Below is a scene I wrote for an episode. Patting myself on the back with this one. 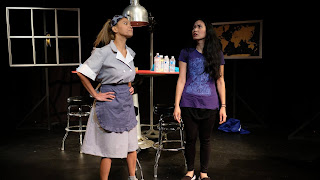 The one-act play will have staged reading this March in Seattle along with Juan Miguel Severo's "Hintayan ng Langit."

3) A huge development for KPANLL is the major motion picture to be produced by Regal Enertainment. It will be directed by Avid Liongoren (Saving Sally). I penned the screenplay. As far as I know, they're currently fixing schedules with the actors, so principal photography should start soon.

4) Last August, I began rehearsing for Tanghalang Ateneo's adaptation of Edgar Calabia Samar's YA fantasy novel "Si Janus Silang at ang Labanang Manananggal-Mambabarang." I played the role of the Dumbledore-esque character Mang Joey. Adaptation and direction was by Guelan Luarca. It was my return to acting after over a decade. What I love about acting is that it's very physical. I think I lost a few pounds during the whole process, despite eating a lot! Also, there's the camaraderie built from working with a bunch of talented folks. Gave me a semblance of a social life.

Bonus Points: Sharing scenes with Jenny Jamora and Xander Soriano. I was so worried I'd be a ham!

Photo below (by Sabrina Basilio) shows me leading a "burial ceremony." 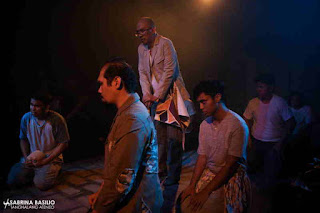 That's about it. A great ride, methinks. Lessee what 2018's going to bring.

DedicatedHosting4u said…
Hey, very nice site. I came across this on Google, and I am stoked that I did. I will definitely be coming back here more often. Wish I could add to the conversation and bring a bit more to the table, but am just taking in as much info as I can at the moment. Thanks .

MindtechAffiliates said…
Thank you very much for this useful article. I really liked it