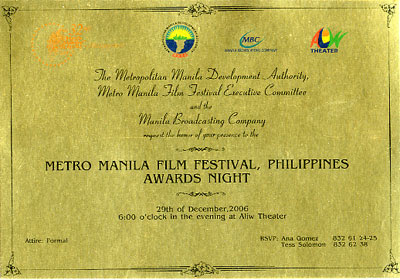 Would be nice to attend for the experience. But it's going to be in the Aliw Theater on a Friday night with a dress code. *sigh* We'll see...

Based on various reports, the Zaturnnah film hasn't been doing as well at the tills, ranking between 5th and 7th place among the nine entries. (I got a text from friend Alain saying that a radio show reported the Zaturnnah film being in the top three. How confusing is that?) Meanwhile, Enteng Kabisote 3 and Kasal, Kasali, Kasalo have been enjoying large chunks of the box office pie. According to Philippine Star's Ricky Lo, EK3 laughed up over P21.4M, KKK swooned to P12.9M, and ZZZ was pummeled to just P2.9M on opening day. With that initial take, assuming it's accurate, the film adaptation could end its run with P20M to P30M, unless something unexpected happens.

Under normal circumstances, I'd discuss with a few select friends about the possible reasons behind the poor performance of certain films, the Zaturnnah film being no exception. What do you think?
film zaturnnah

GENIUS IS JUST ANOTHER MOUSE! said…
Hey! You don't know me but I have your comic book and I've seen the stage version. My friends and I are watching the film this weekend. Please do know that we love every bit of Zsa Zsa and we are watching (again!) the theatre production repeat this January (BTW, the playdate isn't on the CCP's website as of yet). Obviously we can't get enough of it.

Anonymous said…
"... Under normal circumstances, I'd discuss with a few select friends about the possible reasons behind the poor performance of certain films, the Zaturnnah film being no exception. What do you think?"

I think that what the movie greatly lacked is the execution. Add to that, the musical parts seemed too tedious for people.

Anonymous said…
personally, the casting wasn't the best choices. zsazsa padilla is too old, so is pops fernandez. and my friends and i, (and lot of other people that we know)don't like them both. rustom is ok though.

don't get me wrong. i'm such a fan of zsazsa zaturnnah. i have the comic book as well as watched the stage version in all three runs (and would watch again come january.) i just hate seeing a good piece slumped just because it's treatment was lacking artistically.

from the camp treatment in the stage, zsazsa ze moveeh became kitsch.

mopz and anonymous... it's a strange little thing. There are those who found it atrocious. Others found it passable. 'Yung iba, sobrang natutuwa. But if box office is an indication, are we looking at a certified "flopchina cojuangco"?
Saturday, December 30, 2006 at 5:03:00 AM GMT+8

Well, if you are going for the technical aspects then partly yes, it "flopchina'd". (At least it wasn't at the lowest ranking no?)

In all honesty i wasn't really optimistic that the Zaturnnah Moveeh would be bringing the bacons (lol), i mean i know the Filipino mentality towards local movies that have SickeninglyOVERPOPULAR personas (coughENTENGKABISOTEcoughMANOPOCOUUUUGH)
add to that the already been complained in-movie things.

You have to appreciate Joel Lamangan's gay musical fantasia for striving to do something outside the norm. Fresh from its successful theater run, Carlo Vergara's cult comic-book franchise makes its auspicious big-screen debut at the MMFF.

The story revolves around Ada (Rustom Padilla), a timid, gay beautician who morphs into the beautiful superwoman, Zsa Zsa Zaturnnah (Zsa Zsa Padilla), after he swallows a magical stone--okay, a big rock--in his elastic mouth. With his endearingly loquacious sidekick, Didi (Chocoleit), he battles the forces of evil.

Beneath its high camp and unapologetically over-the-top concept are relevant themes that discuss feminism and gender equality. You have to take the film for what it is--a highly entertaining and absurdly hilarious farce that dramatizes a deceptively "weak" man's quest to rid his planet of evil beings --and to overcome his fears.

Lamangan compresses the protracted but otherwise highly entertaining stage musical into a fast-paced and amusing motion picture, but the movie is missing the spontaneity and laugh-a-second humor of its stage version.

Moreover, miscasting is another problem: Zsa Zsa, while ravishingly beautiful, looks too old for her role, while Rustom lacks vulnerability and looks too awkward. But, here's a pleasant surprise: We've never liked Pops Fernandez as a singer or actress, but, despite a now-you-hear-it-now-you-don't English accent, she is surprisingly good as the queen of the plastic-like Amazonistas, a role that Agot Isidro created--albeit not too successfully--on the legitimate stage.

The movie reminds you of Armando Garces' "Darna Versus the Planet Women" (starring Vilma Santos) and the Pinky Montilla-starrer "Supergirl." You might find it inferior to Chris Millado's stage version, but if you haven't been to any of its runs, the big-screen version should suffice.

SM cinemas are not surround... even if they claim so, or kung surround man, hindi maganda ang timpla. Greenhills theaters (at least the old ones) have muffled sound systems.

If you really want to enjoy ZSAZSA ZATURNNAH THE MOVIE, watch it in Shangrila because their sound system is superb! Or make sure Dolby Surround ang panonooran niyong sinehan... kung hindi, tunog lata talaga ang sound and music.

Dennis Villegas said…
The comic book is great...in fact, sa thousads of Tagalog comic books that I own, it is easily in the top ten.
I did not watched the movie though because I don't think Zsa Zsa Padilla is ever right to be cast as Zsa zsa (even if they have the same name). She just looks like a grandmother and not a superheroine.
Monday, January 1, 2007 at 2:40:00 AM GMT+8

Anonymous said…
Right from the moment I found out about the cast of ZZZ, I had a real bad feeling about this movie (which I've mentioned here a long time ago). As in Zsa Zsa as ZZZ? And Rustom? What the hell were they thinking?