- January 22, 2006
The names Eula Valdez and Agot Isidro never came up when message boards would talk about casting Zsazsa Zaturnnah and Queen Femina Suarestellar Baroux, respectively. Then again, I believe hardly anyone (yours truly included) had imagined a Zsazsa Zaturnnah stage musical in the first place--sweet irony, methinks. Theater demands actors of a different mold, and I’ve always found greater faith in the discipline of theater training. 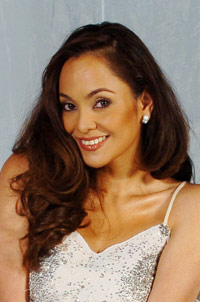 Eula Valdez told me that she wanted to give extra focus on this production since it’s her first time to do musical theater. Laying low after retiring from teen-star status, she bounced back into consciousness of the masses as Amor Powers in the long-running telenovela Pangako Sa ‘Yo. She seemed a bit shy at the press luncheon, and she’s surprisingly not as small as she seems to be on television (a plus for the Zaturnnah role). Yet she’s got those bright kewpie-doll eyes that draw you in.

Only after observing her at the luncheon did I realize that, yes, she has the face that can cover the range of emotions of Zaturnnah. Now some of you might wonder if she can sing, or play the babaeng bakla effectively. As for the former, I think she’s displayed her vocal prowess in Kampanerang Kuba. But as for the latter, we’ll just have to hold our breath.

She was only able to read the book after rehearsals had begun, but was wary of exposing it to her 11 year-old son. But she let him read it anyway, and her son found the book funny. Oh, the things parents let their kids read these days. Heheh. 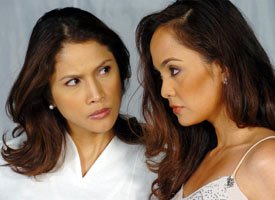 Agot’s one of the few singers who’s successfully crossed-over to the stage. Her performance in Trumpet’s Honk! was okay at most, though that musical didn’t tickle my palate much in the first place. But she’s never played the kontravida, and says that it’s a fun change especially with the things she has to do alongside the Amazonistas.

(Strange coincidence, though. I had mentioned in my previous post that Tuxqs is the brother of a high school friend of mine who was part of my Dungeons and Dragons group. Well, Agot is the cousin of another high school friend who played in another D&D group of mine. One of those little things.)

Agot has the face for Queen Femina. The promotional pics reveal her uncanny similarity to the Amazonista leader. As for the voice, I do remember falling in love with her rendition of her signature song Everyday. But the musical theme for the space feminists is techno, so it’ll be interesting to see how she’ll pull that off.

She told me that she had read the book way, way back. When Chris Martinez (the writer of the libretto) invited her to audition, she was willing to play anything, even our mysterious Taong Barrio #13. Now she’s the big bad broad of the musical, and her enthusiasm shows.

Speaking of enthusiasm, I’ll be out-of-town next week with my co-workers for our annual planning session. It’ll be my first time in Boracay, and I’ll be spending my birthday there. What joy!

And...MANNY PACQUAIO wins!!! There should be more fights--gives the family an excuse to scream in front of the telly.

Anonymous said…
Advance Happy Birthday! And enjoy! Congrats too on the play. =)

kudos to you mr. vergara!

Anonymous said…
i got a sneak peek of the play at the Pasinaya in CCP!

I ENJOYED IT BIG TIME!!!

then the amazonista's production number which was really hilarious.

and i think the final scene where Eula performs.

Anonymous said…
i have watched the play and may i say that everyone involved did an excellent job! at first i couldn't imagine how all of you will turn the comic book into a musical but you did and its so amazing! :)
loved didi, and really loved ricci chan.. :)
Tuesday, May 9, 2006 at 5:07:00 PM GMT+8