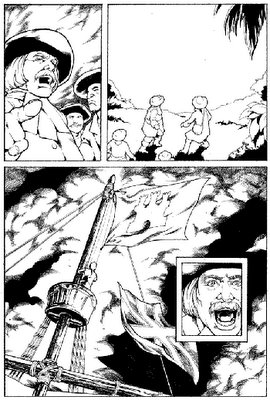 Graphic Classics is an anthology series I would describe as "high-end Illustrated Classics," with each volume featuring either an author or a genre. Talented folks like Arnold Arre and Gerry Alanguilan have contributed to Graphic Classics in the past, and I was fortunate enough to land an art assignment for its next volume, Graphic Classics: Rafael Sabatini. At first, I thought I would be given something short and simple since it's my first time to work with the publication and they'd want to test me out. But lo and behold, a script for a 40-page pirate story "Captain Blood" appeared in my inbox (the average Graphic Classics story runs between 10 to 20 pages). 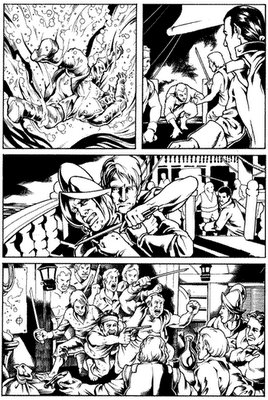 Suffice to say, I've never drawn so many galleons and horses in my life. Apart from the numerous references generously sent by editor Tom Pomplun (including the classic film starring Errol Flynn), I scoured the internet for additional references, particularly the galleons.

What's great about the whole deal is the little things I learned and reinforced about the way I draw. I can do close to anatomically-correct figures from mid- to close-up shots, but they turn cartoony when I go for the far shots. (But I can always say, "That's my style!!") Then there's the issue about rendering water and smoke, and adding shadows in broad daylight scenes. Yup, the learning never ends.

So now I'm more comfy drawing galleons and horses, which is a good prep for any period project I might intend to pursue. Maybe Zaturnnah in the 1700s would be good. (Then again, maybe not.)

Graphic Classics: Rafael Sabatini will be released in February 2006. (Kasabay ng musical.) The story I drew, "Captain Blood," was adapted by Rod Lott. Also in that volume is "A Plague of Ghosts," illustrated by Gerry Alanguilan.

Speaking of the musical, I got word from Tanghalang Pilipino that the open auditions will be on November 29 and December 6. Details to follow.
art comics graphic classics

jonasdiego said…
Galing! Your art just gets better and better!

Ed... Perfect excuse, di ba? :-) Thanks for the encouragement!