Skip to main content
- October 01, 2006
I don't know who owns this Multiply account, but I got the picture below from there. I hope the owner won't mind. This shot was taken in Sta. Ana. I'm assuming this is the location for the final battle sequences. 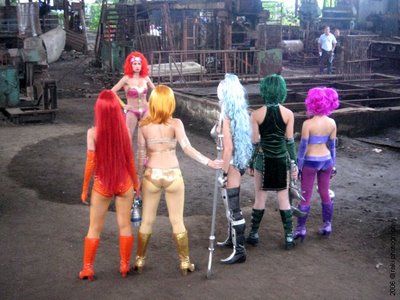 That white-haired woman in the center is supposed to be Pops Fernandez in her "battle gown," which was modified from the book to make it more decent for a PG-13 audience. As for the Amazonsiats, it looks like the production wanted them to be more like "planet women" than ersatz fashionistas, though I can't seem to tell for sure who is whom. Vilma S's staff looks cool from this distance, though I wonder about her gold hair.

Ed said…
I saw Zsazsa on TV sometime last week (I don't watch TV all the time), and I was like "WTF happened to her?" I mean, she is so skinny.

Ner P said…
grabe, ang pangit naman ata ng image ni zsa zsa. she should be meaty and juicy. not dry and withered. won't comment on the fashionistas anymore, since they already looks so, ummmm...
Monday, October 2, 2006 at 5:50:00 PM GMT+8

Anonymous said…
i wasn't satisfied with the look of the costumes. too far from the comic book. oh well, can't wait for this movie though.

and yeah, Say Alonzo's booties are fine! hahahaha. ooops, should stop talkin like a man! hahaha.

Anonymous said…
With fingers to temples and matching kendeng-kendeng, she says, "Seeno ang pinakamateeleenong..." I can't remember the rest of the line but this pic reminds me of Darna Versus the Planet Women. Loves it! I WILL FIND A WAY TO WATCH THIS MOVIE!
Tuesday, October 3, 2006 at 8:49:00 PM GMT+8

tsop said…
OMG! And I will miss this when they show it on the big screen. I'll also miss the rerun. Padalhan niyo ako dibidi na may kasamang Zsazsa Zatuna ha?
Friday, October 6, 2006 at 5:28:00 PM GMT+8

nerp...yah...would've been nice if they used the actual amazonista costumes.

I saw the battle scene sa kakanin factory sa Ignite kanina. Bongga naman siya! As far as I am concerned, career naman ang fight scenes, fight kung fight! Ngud-ngudan at sapakan talaga. Costumes are not as bad as in the pics.